Dimensional shifts, time travel, and Romulans are just some of the fun in store for readers of Dayton Ward’s new Star Trek novel, Headlong Flight. It all starts innocently enough as the Enterprise-E, lead by Captain Picard, is investigating the previously uncharted “Odyssean Pass.” They receive a signal from a nearby planet. It’s not a distress signal as such, it’s more of warning not to get any closer and that the people stuck on the planet are there through their own fault.

Picard sends an away team to investigate and possibly lend assistance. The shuttle hits terrible turbulence and lands with a great deal of difficulty and damage only to discover that the planet they’ve landed on is occupied by an unrecognized alien species from another dimension and that they are responsible for shifting the entire planet from their dimension to the one native to the Enterprise-E, but they no longer have control over these shifts and have been shifting from point to point through a network of buoys for several weeks. And then the planet shifts again, trapping Commander Worf and his away team on the planet. 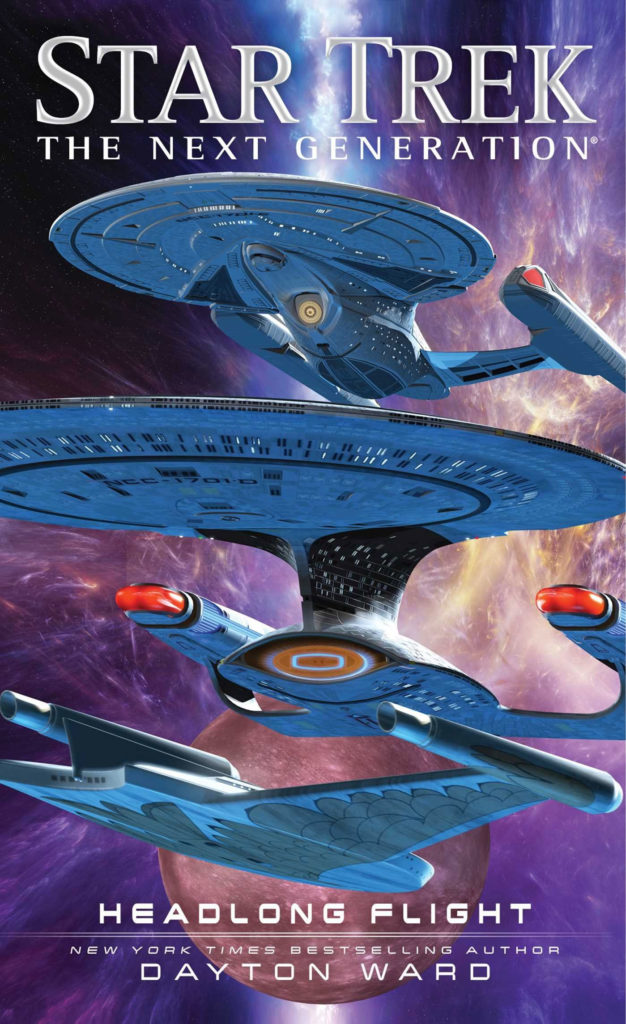 When the planet disappears with his away team, Picard’s crew goes into action trying to figure out where they’ve gone. Meanwhile, in another dimension, on another timeline, the planet appears before the Enterprise-D, where Riker is in command, because Picard was killed by the Borg when they turned him into Locutus. The Enterprise-D, unaware of the danger, moves in to take a closer look at the planet and gets dragged along with it in the next dimensional shift.

[amazon text=Make a headlong flight to Amazon to grab a copy of this wonderful Next Generation story!&asin=1501111310]

The third shift takes the planet, along with Worf and his away team, to a dimension when the timeline is a hundred years in the past and three Romulan ships are specifically watching for the planet to reappear because they’ve noted it before and want to get their hands on the technology behind the planet’s movements. Ultimately, the planet shifts back to the node that takes it to the Enterprise-E’s dimension and drags the Enterprise-D and the Romulans with it.

We are left with classic Star Trek: The Next Generation, as both Enterprise crews race to get everyone back where they belong before the equipment causing the shifts completely blows out. While all of that is going on, there is a great deal of character angst as the two crews try not to break the Temporal Prime Directive while being desperately curious about each other.

I enjoyed this book, but I would have liked to have read even more of the two Enterprise crews and how they handled the situation. There is a lot of Riker’s perspective and a lot of Picard’s, but not much from the other characters, which was unfortunate. The Romulans were well written, but since they were from a hundred years in the past, they really weren’t much of a threat, although they did blunder about in the beginning and precipitate many of the problems that had to be solved. The Romulans aren’t my favorite aliens though, so take that with a grain of salt. All in all, this is a solid Next Generation book. Fans will find much to like about it. Check it out and let us know what you think in the comments below.