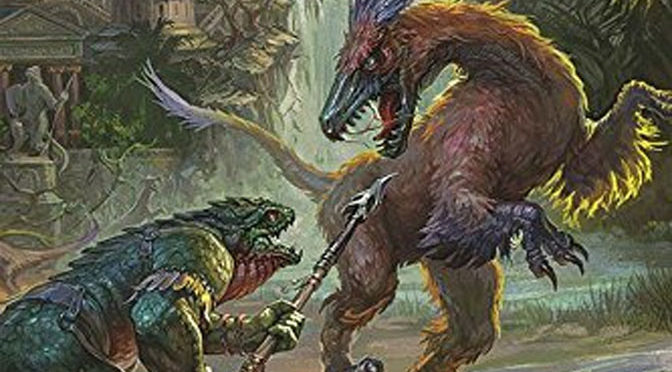 Pathfinder Tales: Through
the Gate in the Sea

It this latest Pathfinder novel featuring the popular character Mirian Raas, a salvager captain, readers are treated to a sea tale, inter-dimensional travel, a complex commentary on imperialism and a good old fashioned abandoned ancient city. The trope of adventuring in the ancient abandoned cities of fallen empires makes up many sci-fi and fantasy tales. Ever since Conan lost his Pirate Queen love Bêlit in the classic 1930’s tale, “Queen of the Black Coast” this plot furnished the backbone for many such stories.

The Pathfinder Role Playing game takes place in the world of Golarian. One part of this world has the Chelaxian people who once had a great empire, establishing colonies around the world. It then went into retreat, turning into a devil-worshiping nation. One of their colonies was founded off of a body of water called Desperation Bay where they exploited the native peoples of the Laughing Jungle. 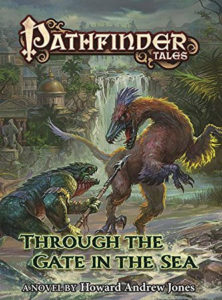 These colonials now have their own government and a decaying class system. If this sounds like a place called Earth, then you are not far off. Much of Golarian takes its cues from history and offers more than your normal feudal governments of classic fantasy. There are plutocracies, oligarchies, theocracies and even the occasional democracy! It makes for a wealth of various adventures and allows those who write for it many different elements to draw on in their stories.

The center of this story is Captain Mirian Raas, whose half jungle folk Mwangi, half Chelaxian colonist parentage makes her as complex as she is deadly. Mirian can’t seem to catch a break. Every time she comes upon a valuable bit of salvage, magical and mundane dangers always present themselves. Mix that in with the politics of old colonial rulers, native peoples, Pirate Captain rulers and you have a Pathfinder Tale that takes its cue from a role-playing game that prides itself on modern sensibilities applied to a fantasy setting.

[amazon asin=0765384388&text=Step through to adventure with a copy of Through the Gate in the Sea from Amazon!]

A child of both a subjected people and colonists Mirian can navigate both worlds and well as the treacherous waters of Desperation Bay. It also gives her the wherewithal to befriend a lizard man named Jekka. Jekka is descended from an amphibian race whose city exists in a long-lost pocket dimension that can only be reached by sailing “Through the Gate in the Sea”.

The author does a good job of giving the reader a feeling of how a different creature like a lizard man would think. Jekka’s struggle to understand human behavior, his “friendship” with Mirian is more of a familial bond. He calls Mirian sister and views all who set against her as blood enemies. His sad acceptance of how his people are being displaced by the quicker breeding and more adaptable humans is well portrayed.

The rest of Mirian’s crew does not fall into any sailor stereotypes and the way she cares for them gives an investment into the story. You really want this ship and its crew to survive.

The sailing sections are well done and reminded me of the other Pathfinder author Chris Jackson. When I read Jones’ acknowledgment of Chris Jackson as helping him with these details it pleased me. I really liked that two authors from the same-shared world would also share their craft.

The complex, diverse and adventure-ready world of Golarian was well served by this book. I am looking forward to reading this author again.