Pathfinder Tales: Pirates Prophecy is a fantasy novel that takes Chris A. Jackson’s popular pirate, Captain Torius Vin, and turns him into a privateer who pits himself against the slave trade for the democratic country of Andoran. Both his crew and his supernatural love, Celeste, support him. They do this in the role-playing world of Pathfinder.

We start the book with Torius Vin disguised as a merchant captain from the Persian-inspired county of Thuvia. He gains entrance to the port city of Ostenso, where the slave trade flourishes under the devil-worshiping Chelish people. A Sorceress called Vreva aids him. She uses her magic to disguise them both while taking great risks to end the institution of slavery in the city. 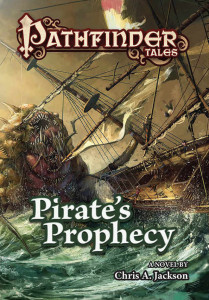 The realistic and detailed sea and sailing descriptions make the story’s magical elements more enjoyable. According to the book jacket, Jackson is an accomplished sailor who lives on a boat in the Caribbean. The sea is described in all its states with great sentences. One passage reads, “The hiss of foam, the creak of wood and the occasional flap of canvas would have been soothing to Celeste if not for the low scudding clouds that blocked the moon and stars.” Writing like this elevates the story above the average game tie-in book.

Another great thing about the book is that it mixes a few genres together in a pleasing way. It is a pirate tale and fantasy with elements of intrigue. Making a pirate a protagonist is always a hard task given that pirates are thieves of the sea. By giving Vin a new, more noble, job as a privateer and a tragic past as a slave, he comes across almost like Rafael Sabatini’s Captain Blood. The fantasy elements have a coherent background since they share the Pathfinder Game’s universe, which helps to coalesce the background of the story.

The intrigue mixes both the pirate and fantasy together so it doesn’t just have swordfights at sea and magical battles with spells. The characters have to go undercover as merchants or members of a traveling troop of entertainers to uncover an evil plot.

The reader should be ready for some very adult elements in this book. Seduction goes along with the spying and many of the minor characters in the book meet their end. Unlike some fantasy books, this is not a book of good versus evil. It’s more like good-intentioned versus bad.

The interactions Torius, Vreva and Celeste have with the Chellish Harbormaster Lothera are both funny and poignant. They all must hoodwink her in different ways and all feel slightly sorry for making her romanced, tricked, and outmaneuvered by them. If you like fantasy or Pathfinder this is well worth the read.