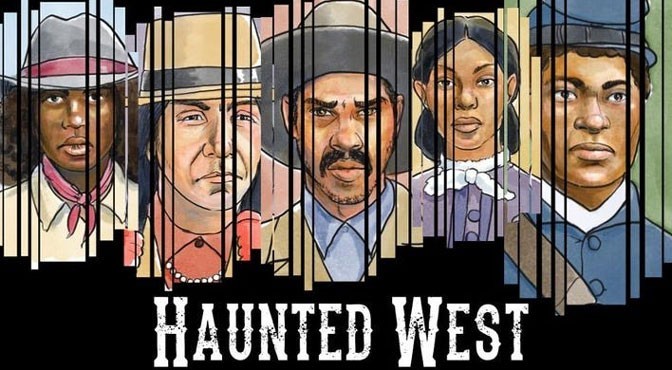 This book announces itself by both its scope of achievement and sheer size. The art and layout are also striking. Black and White historically sourced photos mix with full color illustrations of ghosts, aliens and characters. The fonts are varied and match the American West it invokes.

I bought this book, which you can get directly on the Darker Hue Studios webpage, because I really liked Harlem Unbound and had covered the Kickstarter for Haunted West. But I didn’t expect an independent company to produce an eight-hundred-page masterpiece of history, setting and game mechanics that marshal so many people’s talents. This will require more than one review as I will be making characters, playing the game and looking at the “ballads” inside. It raises the bar for Table Top Role-Playing Games (TTRPGs) just as it lifts from history many less told stories about the Old West. It does all of this through the metaphor of song, specifically the ballad.

The Game Master (GM) is a Balladeer, the adventures Ballads and the players make characters picked from Paragons (12 different Archetypes). The definition Haunted West gives of this GM could apply to any Dungeon Master or Keeper. “The Balladeer is countless things all at once: Project Manager, narrator, referee, player and possibly the most essential person at the table.”

This Balladeer will require great players as the character creation method uses a Milestone or more commonly called Lifepath method. Backgrounds come with skills and consequences. It reminded me a bit of Traveller but with more Agency and less randomness. It definitely shows you that the history of the American West can be cruel, kind and above all complex.

Just like Harlem Unbound, Chris Spivey looks at games that have used history and literature like “Call of Cthulhu” and expanded the setting and its NPCs to include those peoples who, when not included, were represented in repressive, horrible ways. The first edition of “Harlem Unbound” was an award-winning independent publication from Darker Hue Studios that offered ways to play the Harlem Renaissance in a horror TTRPG using either Call of Cthulhu or Gumshoe mechanics. Chaosium then put out a Second Edition, adding it to their company’s 7th Edition library.

I’ve used “Harlem Unbound” in my games and bought Haunted West as a way to use it in a Weird West Campaign I had been running. What I received in the mail lived up to their slogan of “800 pages of history as it was and history as it could have been.” The writing is superb with such phrases as, “Western stories with the supernatural, the otherworldly and the extraterrestrial: in other words, the Weird.”

Spivey wears many hats in this book, and not just a cowboy one. He is a writer, an editor and a sergeant overseeing a special forces squad of writers, artists, play-testers and sensitivity consultants. It shows in the breadth of the history, people and setting that the book puts forth. It also highlights the mechanics of the game called “The Ouroboros System”.

This system has three levels of play: Deadman’s Hand (full rules traditional), Quick Draw (quick narrative) and the Badlands (tactical for miniatures). It has some resemblance to the 2d20 of Modiphius and Basic Roleplaying of Chaosium where you roll under a target number and consequences from these rolls continue afterward. I’m still digesting them but as a game designer to give players and GMs levels of complexity to choose from shows a caring game creator that has listened to the input from their collaborators and play-testers.

The proposed setting Reconstruction (1865-1870) takes on the history of slavery and exploitation in a way that liberates characters to tell stories that usually aren’t brought forth in TTRPGs. In other TTRPGs set during that time period they use a setting where the Confederate South is sometimes still a government and Reconstruction is ignored. Obviously the African-American, Native American or immigrant stories suffer in such a setting. At least one of these games changed their setting in 2019 and retconned the Confederate States of America falling in the war.

That being said there was an exception to this. A 1994 game called Castle Falkenstein, written by Chris Podsmith of Cyberpunk fame, had a steampunk/fantasy flavor setting that gave a more liberated Weird West in the supplement “Six-guns and Sorcery.” In that alternate history Abraham Lincoln was not assassinated and later President Ulysses S. Grant has magical protection from a Seneca Shaman to carry out reforms.

Spivey’s setting still has the death of Abraham Lincoln but uses much more muscular Reconstruction to literally level the playing field of the game. The Southern States become territories that enforce civil rights and there is a “State of Sequoyah” that gives “Aniyunwiya (Cherokee), Chikashasha (Chickasaw), Chahta (Choctaw), Muscogee (Creek), and Mikasuki (Seminole)” a seat in the United States Government. Laws passed against Chinese Immigration are rejected.

This is just a small sample of the very well thought out metaplot for the setting. It leaves lots of room for adventurous “Ballads” and peak “Paragon” play.

Just like this is merely the first of two other reviews on Haunted West; the story of this game has not finished with its publishing. Chris Spivey has hinted at some more “Ballads” coming and from a November 16th tweet of this year, a “Roll20” offering in 2022. I am looking forward to seeing how this system translates to the Virtual Tabletop (VTT) and makes its way across the TTRPG community.