The Explorer’s Guide
to Wildemount

The Explorer’s Guide to Wildemount is a supplement for Dungeon and Dragons that allows players to make characters, explore, adventure and create their own fiefdoms within the world created for the popular Critical Role livestreaming game. It offers up an extremely detailed look at one continent within the larger world of Exandria. But don think that means that there is not a lot of content here. In fact, this is one of the most detailed D&D supplements that we have come across in quite a while, especially for one that covers a relatively specific area.

Those of you who have watched Critical Role will recognize Wildemount from the second season of that show. The island continent consists of four major areas and within that are every biome and setting that you could hope to ever play in, from frigid mountains to arid landscapes to verdant forests and cultivated fields. There are also villages, towns and bustling cities. And there is also a heavy nautical element, so those looking for a pirate or swashbuckling type of game will find a lot to love here. So depending on what kind of adventure you might crave, the Wildemount setting can likely oblige. 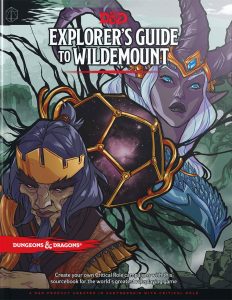 Of course, familiarity with Critical Role is helpful in enjoying this supplement, but it’s not required. The Sword Coast doesn’t have a hit streaming show named for it, and millions of players have enjoyed adventuring there. It’s just that if you have followed the show and wanted to adventure in a similar setting, then Guide to Wildemount is an easy ticket to that adventure.

One question that might come to mind, especially for those who have not enjoyed the Critical Role program, is if there is a need for yet another D&D supplement. What is the hook of Wildemount? It certainly does not offer anything unique in the way of the Eberron campaign setting with its use of marks as a new form of magic, nor does it follow a very tight theme like Ravenloft does with horror. But Wildemount does offer an interesting pre-war, or even current war setting that most players have probably not experienced on a large scale outside of maybe a single adventure.

The world of Exandria is one that has known almost constant war since its creation. It has an interesting backstory where gods created the beings who live there (humanity and the other races) and then realized that elemental creatures already inhabited it. This lead to a massive war with the elementals, and some of the gods even switched sides at one point. Demons got involved as well as some Lovecraft-like terrors. In the end, most of the world was destroyed along with all but about a third of the human, dwarf, elf and other members of the mortal races that called Exandria (and Wildemount) home. 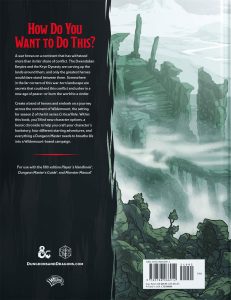 The so-called good gods had to leave the world to ensure that their evil counterparts were also banned, leaving humanity and meta-humanity to forge their own fate. They still have access to divine magic and of course arcane powers, but the gods are no longer able to physically manifest in their world. But all was not well and good. In the absence of the gods, new tensions have risen over the years between nations. In Wildemount the Dwendalian Empire is about to go to war with the Kryn Dynasty in a way that shows many similarities to the original wars on Exandria. The potential of open war and how various sides are trying to tip the scales before the first strike prevails though everything in this campaign setting, while criminal empires lurk in the shadows making money from all sides and pushing their own greedy agenda.

The land of Wildemount is a power keg that is about to explode, and the players will have plenty of opportunities to get involved in various plots and political intrigues for one side or another. There is even the possibility of open warfare and massed battles, something that few campaign settings offer.

To help move adventures along, the Guide to Wildemount offers extremely detailed information about nearly every nook and cranny across the entire continent. The forward from author Matthew Mercer claims that even those who are very familiar with the Critical Role show will find many secrets and surprises, and that is inevitably true. The level of detail is rather incredible. Readers learn about the population of an area, their beliefs, the level of crime, key individuals, the geography of the land and just about everything else that would be required (and more) for a detailed travel guide in real life. In addition, adventuring hooks are offered for most places that can become the focus of a main adventure or interesting side quests as a party passes through an area. 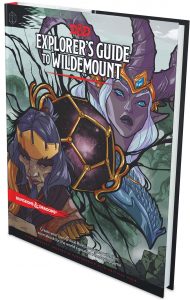 Given the level of detail, most game masters will be thrilled at the amount of paths they can set out for their group regardless of the type of game they are used to playing. Although nothing really stands out as spectacularly unique about Wildemount, it makes for one amazing sandbox adventure. With a little bit of creativity, almost any game master can use the guide to craft an incredible adventure for their party of player heroes and have loads of backstory and support to back it up. If only for that reason, the Guide to Wildemount makes for a great supplement to have inside any D&D travel sack.