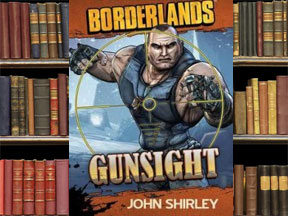 Gunsight shows off the humorous side of Borderlands

John Shirley’s latest novel Borderlands: Gunsight is a romance of rivals and a comedy of errors, all told by a tale within a tale technique. The center of the action is the tumultuous romantic relationship between Mordecai (a player character in Borderlands 1) and Daphne, a deadly interstellar adventurer. Shirley introduced this pairing in his second Borderlands novel, “Unconquered.”

The tone is lighter in this book than in Borderlands: The Fallen. There is a slapstick quality to the action. This follows the game, with its cartoonish perspectives and overkill weapons. The backdrop is still the wasteland planet of Pandora, a world where mutants and marauders all compete in a planet whose only resource is weapons of less than mass, but more than moderate, destruction.

The plot follows the kidnapping of Daphne by one Pandora warlord to use the sharpshooter Mordecai and his beerier pal Brick against another warlord. Daphne is as dangerous as Mordecai and is in many ways like him, except for how they look at the planet Pandora.

Shirley’s version of Mordecai loves Pandora like an adrenaline junky likes action. He has like-minded friends who have become a family to him. Mordecai also drinks way too much. Daphne does not like the planet and sees better profit elsewhere. Risk versus reward is her mindset while risk versus risk is his.

As in any romantic comedy, a love triangle is introduced and in Pandora it comes with a brazen NPC called, ‘Mad Moxxi.’ Moxxi is a creature of Pandora, brash, lewd and poisonous. She wants Mordecai for herself and taunts Daphne at every opportunity.

These characters are as outrageous as the game universe they inhabit. An extreme example is a robot called “Extra” who has an “extra personality” who speaks through him. The personality is that of an old flame of Mordecai whose psychotic hot/cold affections are funny and manipulative. She imprinted her mind in the robot, called a “claptrap” in game terms, to bedevil her ex-lover. The robot comments on the “ghost in the machine” and has conversations with Mordecai about his piggybacked personality. I think a whole book could have been written with this character.

The story begins and ends with the weapons dealer Marcus telling a bunch of street urchins about the last adventure of Mordecai and Daphne. He caught them trying to steal from him to buy food. In a rare act of benevolence for Pandora he feeds them and tells them a story. It’s not a story exactly appropriate for children, but the Borderlands Game, like the book, is rated mature and on the scale of mundane to manic hits the hyperactive end.

So if you like the game and like your science fiction frantic, then this is a good, quick read.