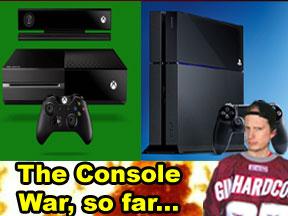 Looks like it’s time for me to once again speak out about the next generation consoles. Now that both the PS4 and the Xbox One have been released to the general public (I will refuse to use the derogatory name Xbone,) we have seen both systems sell out everywhere they launched, and once again we are seeing the excessive hoarding that is being done.

Amazon has listed both consoles as sold out from their distribution centers, but they are available from their resellers. As of Thursday night, the PlayStation 4 is selling for a minimum of $790 including shipping, while the Xbox One is selling for $1,064 from the same reseller! That’s right, to get the One on Amazon, you will have to pay at least twice the retail price.

Over on eBay, it’s is a little better. PlayStation 4 consoles are ranging anywhere from $585 with free shipping up to $700. As for the Xbox One, the listings range from $600 (for a Day One Edition) up to $750. Now granted, I would be more cautious about eBay. Because of shipping (though both of these listings have free shipping) and seller integrity, it is still a much better deal than going on Amazon.

I won’t even try to go to the brick and mortar stores to get one, because I know they will not have any in stock. I wouldn’t be surprised either if they intentionally held back units for their employees to resell for a profit. Not really fair for those who want to buy a console for themselves, is it?

But there are those who bought their consoles and are now stating problems with them. On the PlayStation 4 side, we have heard reports of the Blue Line of Death, or several variants including the Red (or Orange) Line of Death. Sony has acknowledged the issue and have given guidelines of how to resolve them. Rumors state that most of these errors come from systems that were rewarded early during Taco Bell’s promotion, and even more, there were rumors of Foxconn sabotage, which a message board post saying "you don’t treat us well, we will not treat your PlayStation 4 well either. At least it will turn on."

Thankfully we haven’t heard much of the errors lately, but there are other elements coming out that are bringing the PS4 some controversy. Because of the PS4’s Twitch capability, some livestreamers are presenting themselves in a vulgar manner, appearing on camera naked, and even going as far as stripping their spouses. Granted the Xbox One will not show Twitch livestreaming at launch, and I hope they will be keeping a close eye on this, but if what I’m hearing about Microsoft banning vulgar language, I wouldn’t be surprised to see them crack down as well.

While we’re on the subject of the Xbox One, it has been under close watch because of last generation’s Red Ring of Death system errors last year, and so far there have been no signs of that yet, thank goodness. Customers are reporting issues with the One’s Bluray drive not reading discs, and even making strange noises while trying to run them. Microsoft admits to the problem of the broken disc drives, but the way they are resolving it truly impresses me. Since the One can play digital downloads of the same game, they are offering customers the ability to get replacement console, and also a free digital download one of the following: Ryse: Son of Rome, Forza Motorsport 5, Dead Rising 3 or Zoo Tycoon.

While offering a free download does seem suspicious, as I would prefer a disc based copy of the game, this is actually a good way to make up for this problem, and I have to commend Microsoft for that. I’m not sure what Sony will do yet for the line of death PS4s.

But with these issues, it’s got me thinking about buying a next generation console. Not having the money to do so right now might not be a bad thing, and waiting until I get my tax refund will allow these bugs to be worked out before I make my final decision, be it a PS4 or an Xbox One.

Besides, I still have a lot of good 360 titles to play until then.

Waiting For: My tax refund, but at least it gives me time to let the kinks get worked out of both consoles.