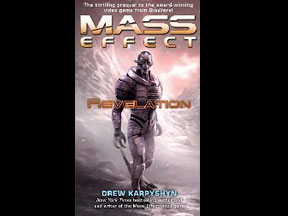 The great thing about the Drew Karpyshyn Mass Effect novels is that they are penned by one of the games writers. The novels, especially the first, give you more of a background on the Mass Effect universe and its history. Unlike many game or movie tie-in novels, where a hired pen either hits the target or misses, this time you have an original creator, who cannot help but hit the bull’s eye.

The first book, Mass Effect Revelation, gives the rocky history of humanity’s entry into the galactic intrigue that permeates the game. You also find out about multi-species politics and how it gave rise to the Citadel Council, a sort of Star Chamber of the more powerful species, which have their super agents, the Specters, as enforcers of the peace.

Some of the characters are familiar to game players, like Saren, a specter that dislikes the human protagonist (David Anderson) in the novel and humanity in general. You get more of a background on David Anderson, the first commander of the Normandy and how he became so central to the action. You also find out he is the first human ever considered for Specter status.

The book has kind of a reverse reveal. In most science fiction a new technology or discovery changes the world and affects the characters in it. In the Mass Effect universe, you find a universe where the technology of a long vanished race and the manipulations of an ancient hidden conspiracy drive the plot.

The plot revolves around the character of Kahlee Sanders, a researcher at a secret base. She is working on a classified project concerning artificial intelligence that is based on a special artifact of reaper design. Kahlee provides both a love interest for Anderson and acts as a through line for the next two books. She is a brainy damsel who ends up in distress more often than not.

One of my favorite minor characters is Anita Goyle, the first ambassador to the Citadel. Her striving to make a place for humanity in the galactic Babylon of Mass Effect is well portrayed. Going before the Council to defend all of humanity from intergalactic sanctions is something rarely seen in science fiction. More often such problems are worked out with ray guns and force fields. Her interactions with the aforementioned Citadel Council give the reader an insight into how the politics of the small multi-alien over-government subtly works against humanity and eventually causes the rise of the underground, pro-human, alliance organization Cerberus.

This does not mean there is no action. There are lots of fights, chases and intrigue, enough to give the reader their Mass Effect fix while waiting for the Mass Effect 3. The science of the fiction is also explained during these action scenes. Like the best space operas the faster than light travel, the miraculous healing technology and the super weapons have an internally consistent logic.

Since more than one writer works on Mass Effect; the game, the novels and the comic books, this shared universe had multiple authors reinforcing and supporting its structure. The author thanks his fellow Mass Effect writers in the beginning, along with his wife for their support.

The fantasy world had a similar shared universe created in the late seventies with Thieves World. A bunch of authors at the venerable sci-fi conference Boskone lamented how they had to create a new world with every new story. So Marion Zimmer Bradley, Lynn Abbey, C.J. Cherryh, Phillip Jose Farmer, Janet and Chris Morris along with many other authors created a seedy fantasy city where they shared each other’s characters and created an anthology that spawned over a dozen books, a comic book series and a game!

The great thing about such efforts like this and certain Anime is you get to see your favorite characters and situations from different perspectives and with different treatments. So if you want some background on the game while waiting for Mass Effect 3 to be released, then this novel and its sequels are the books for you.