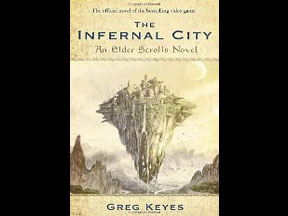 Elder Scrolls fans must suffer long waits between our beloved video games. In the years between Oblivion and the upcoming Skyrim, Greg Keyes stepped up to pen a fascinating book set forty years after the events of Oblivion.

Somewhere south of Black Marsh an inverted mountain known as Umbriel floats in the sky. On top a glittering city, below death comes to Tamriel, and after death, the dead rise as a zombie hoard bent on destroying everyone in their path.

The story is told from several points of view, but there are four main characters. Mere-Glim is an Argonian and the best friend of Annaïg, the daughter of a minor Imperial lord. Annaïg and Mere-Glim live in Lilmoth, the southernmost city in Black Marsh. Annaïg and her father are among the last Imperials still living in the Argonian region, which has largely reverted back to Argonian rule. The Empire is no longer what it was. Anxious for adventure, Annaïg convinces Mere-Glim to go with her to investigate Umbriel. Mere-Glim reluctantly agrees, more to keep Annaïg out of trouble than out of any real interest in exploration. Annaïg is a budding alchemist and is always seeking ways to advance her craft.

Elsewhere in Tamriel, Colin, a young man from Anvil, becomes an Inspector, which is a secret, special-forces branch of the Imperial guard. He finds himself pulled into the search for Umbriel when he is assigned to find the missing heir to the throne.

Prince Attrebus is the fourth main character and the missing heir. He seeks Umbriel because he fears it will advance to the Imperial City, but Prince Attrebus is not the hero he imagines himself to be and the path before him is beyond anything he has ever experienced.

The Infernal City is an adventure and a well told one. I found myself quickly sucked into the plot, attached to the main characters, and worried for the fate of this world where I have spent so many hours. Is this a book for readers unfamiliar with The Elder Scrolls? I don’t know. I’m so familiar with that world, it’s impossible for me to judge, but if you haven’t played the games, play them. They’re wonderful. Then read the book. It’s a very enjoyable read.

I wasn’t sure what to expect from a book set in such an open world game with characters that players develop themselves, but Greg Keyes did not disappoint me. He manages to capture the grandeur and complexity of The Elder Scrolls universe while weaving a new and fascinating story. My only issue with the book is its abrupt ending, but no worries, the sequel, Lord of Souls: An Elder Scrolls novel, just came out.