This novel is based on the newest Star Trek series Discovery.  Discovery is on CBS All Access and does not advance the Star Trek television franchise into its future but instead mines the history of the Federation before Captain Kirk took command of the U.S.S. Enterprise, during the Federation’s war with the Klingon Empire. Like the previous Star Trek: Discovery novels, Desperate Hours and Drastic Measures, it highlights a particular member of the crew and gives you some of their back-story.

The main characters in the series are the very confrontational Michael Burnham (played by Sonequa Martin-Green of the Walking Dead) and the very solicitous Saru (Doug Jones of Hellboy).  Burnham is a human whose parents died in a Klingon attack and she was adopted by a Vulcan diplomat named Sarek and his human wife Amanda. If this sounds like Spock’s parents you would be right. Burnam is Spock’s foster sister! Saru, on the other hand, is a Kelpien. He is a prey creature with hooves who has a sixth sense when danger is near and always takes the path of retreat, caution or diplomacy. 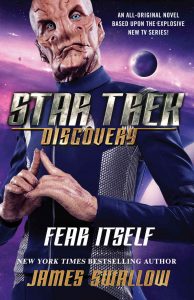 This amazing cast does not disappoint and the show is worth watching.

Desperate Hours gives some of Burnam’s back-story, while Drastic Measures gives the history of their two Captains, Philippa Georgiou and Gabriel Lorca. Check out Gameindustry.com’s reviews of both those books at the links above.

In Fear Itself, the crew, captained by Phillippa Georgiou comes across an alien non-Federation starship in need of assistance. This ship is from the planet Peliar and they are transporting another alien race, the four-armed Gorlan, to another planet since the Peliar will not accept them. The Gorlan tried to immigrate to Peliar but they rejected them and are settling them elsewhere.

During this interaction Saru and an away team are taken hostage and they end up causing an interstellar incident with the Tholians, the crystalline creatures that the original Star Trek ended up confronting in one of its most famous episodes.

[amazon text=Fight fear and have a great time reading a copy of Star Trek Discovery: Fear Itself from Amazon!&asin=150116659X]

The action is non-stop in the book and it is full of plot twists, much like the show. The conflicts are never good versus evil but more desperate choices by desperate people who are looking out for their own good.

This novel centers around Lieutenant Saru and explores the brother/sister rivally that Saru and Burnham exhibit as they both compete for the approval of their mother figure Captain Philippa Georgiou. The Captain encourages this competition, as a way to elicit different opinions from her crew but also tries to make them see it can also be a complimentary relationship.

Saru’s struggle is that he doesn’t see himself as complimenting Burnham but instead being overshadowed by her. To overcome what he sees as shortcomings he deliberately engages in assertive behavior and breaks some Federation policies, much like Burnham does, to try and stand out more.

This novel combines significant character arcs and sci-fi combat in a very quick read. If you like Star Trek and how it explores moral questions with complex characters in its well-established universe then this is your book.