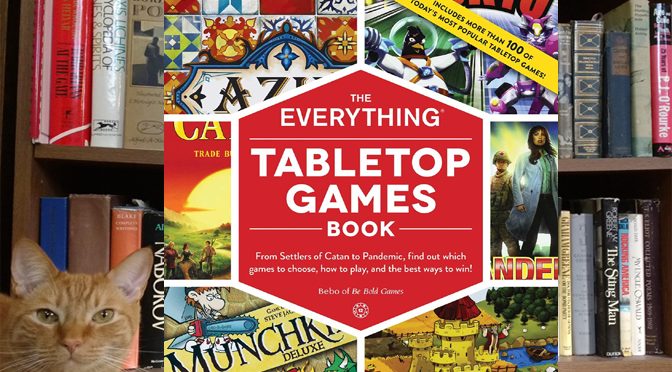 The Everything Tabletop
Games Book

The very long titled, The Everything Tabletop Games Book: From Settlers of Catan to Pandemic, Find Out Which Games to Choose, How to Play, and the Best Ways to Win!, is the book you get for your friend who wants to learn about different tabletop games for themselves or (if they have them) their children. The author makes it very evident that as a mother she wants tabletop games that are fun, inviting for everyone and age appropriate.

This is not an encyclopedia of games but an overview of more than 100 games. Given the explosion of games, which Bebo talks about, she groups them into 15 categories. Here are just a few; Contemporary Classics, Deck-Building Games, Tile-Laying Games, Worker Placement Games, Cooperative Games, Hidden Role Games, Area Control, Role-Playing Games and War Games. 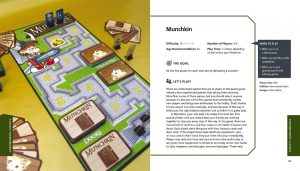 I’m sure the reader knows some of the contemporary tabletop games classics like Munchkin, Ticket to Ride, Settlers of Catan or Lords of Waterdeep. But in the Role-Playing Game Category there are games like Weave, which uses Tarot Cards and a computer App or Star Crossed, a romance role-playing game. These more unknown games are presented along with Dungeons & Dragons.

The strength of this book is that it highlights some of the newer or more groundbreaking games along with some of the old stalwarts of the industry. There is even a lesson in terminology. Bebo points out that Boardgames are a subset of tabletop games. So Settlers of Catan and Dungeons & Dragons are both tabletop games but Settlers of Catan belongs to the boardgame subset while Dungeons & Dragons does not. 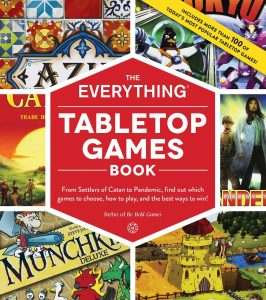 After the four metrics are given the review is divided into The Goal and Let’s Play. Bebo usually keeps this to one sentence but the more complicated and unusual games get more. Dark Moon, a game based on cult horror movies, has a one-word goal “Survive.” One Night Ultimate Werewolf requires a more complex goal explanation because there are multiple ways to win. 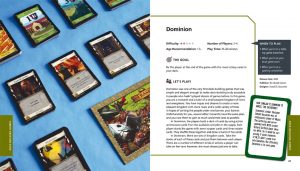 The Let’s Play part of the reviews are well done and the accompanying artwork is what give the book a big advantage over other books of its type.

I hope that Bebo’s next book would be on just one of these categories. A whole book on just different Deck Building games or the vast amount of Role Playing games would be welcome by this author.