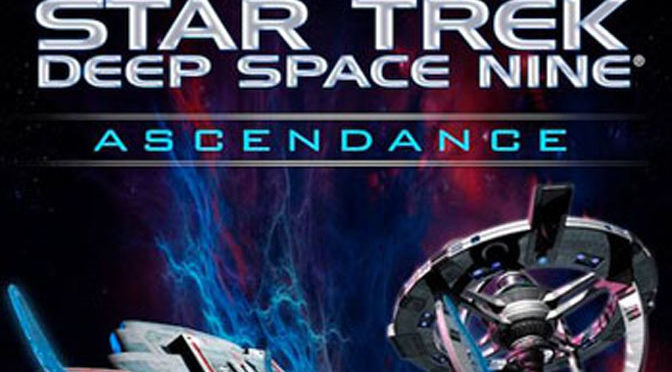 David R. George III is an author familiar to Star Trek fans for his incredible volume of books in the genre and the fact he wrote episodes for Star Trek: Voyager. He currently has seventeen books in the Star Trek Universe along with numerous articles and some short stories. Most of his novels revolve around the show Star Trek: Deep Space Nine.

Star Trek: Deep Space Nine: Ascendance takes place after another of his novels SACRAMENTS OF FIRE. The plot’s central action revolves around the popular Bejoran character Major (now Commander) Kira Nerys. This character not only got to meet an evil version of herself in the oft-used Star Trek Mirror Universe, but also got copied by a Cardassian sleeper agent called Illiana Ghemor in the episode Second Skin.

I bring these three Kira’s up because much of the book revolves around both the sleeper agent and the mirror universe. 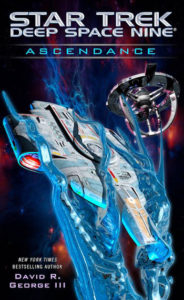 Each Kira plays a part in the Bejoran religion/mythos. The Commander is “The Hand,” the mirror Kira is “The Voice” and Illiana Ghemor Kira is “The Fire.” This Cardassian sleeper agent, Illiana Ghemor, takes being called “The Fire” very seriously as her battle cruiser starship tows a weapon behind it that could destroy all of Bejor. Her hatred of the real Kira and her horrific fictional history all contribute to making this massive revenge. This is all rolled into the Bejoran religion concerning the wormhole and a race of dangerous technologically advanced fanatics called the Ascendant. This race is portrayed as having ships and weapons that out class Starfleet. It requires Kira working with these fanatics to try and stave off an inevitable slaughter.

I’m always impressed by what my wife and I call the, “science-fiction science”, of most Star Trek works. The writers try and keep their phasers, transporters, tractor beams and other technological devices from overwhelming the story. This book tends to push that envelope by introducing new technology from the attacking race of the Ascendant. It also gets into a little of the mystery of the wormhole near Deep Space Nine. Part of the story hook in the original series was the unknown mechanics of how it worked and the mythology the Bejorans attributed to it. The Bejorans called the aliens who lived inside it, “The Prophets” and the wormhole “The Celestial Temple.”

As fans know the bodiless aliens acted as deities to those Bejorans who kept the old faith and as caretaking paternal beings to the Bejorans who had a less religious view. They are written in this book as being so advanced no one can truly communicate with them except through intermediaries like the ex-Starfleet Commander Benjamin Sisko. He makes an appearance in the book.

The plot of Star Trek: Deep Space Nine: Ascendance is labyrinthine, the story jumps back and forth to the mirror universe and keeping track of the three Kiras can at times be challenging.

If you like the expanded Deep Space Nine universe, where familiar characters have aged, accepted new ranks and missions, while facing new challenges, this is your novel. If you prefer books that stay inside the old series, you may not appreciate it.