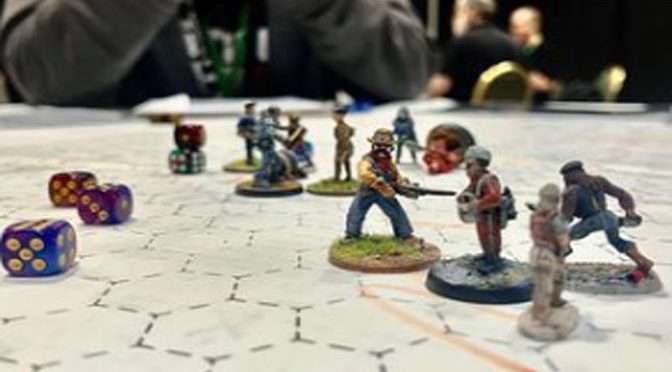 Our game review today is a little bit different than normal. GiN Book and Game Reviewer Colin Flanigan recently traveled to the Travellercon Convention, which revolves around all things in the Traveller RPG universe. While he was there, he watched the crew from Burnt City Games testing out a new RPG based on the classic Dumarest series, which in turn also inspired Traveller. He got to see the new game in action, and even talked to some of the developers. The following is Colin’s report:

These influences are explored in the Michael Andre-Driussi book “Deciphering the Text Foundations of Traveller: and Other Essays” and Shannon Applecline’s “The Science Fiction of Traveller.”

But one of the largest influences on Traveller has to be English author Edwin Charles Tubbs and his “Dumarest of Terra” series of books. In these novels, the term Traveller, with the United Kingdom rather than United States spelling, makes an appearance in book one. The terms High Passage, Middle Passage and Low Passage are employed. Cryogenic sleep was also being used to cross large expanses of space.

These elements of Dumarest’s fictional setting are part and parcel of the setting for Traveller’s role-playing game.

The tone of the Dumarest universe is not like the utopic setting of Star Trek. Gene Roddenberry’s Federation portrayed an evolved humanity with high ideals and a society that has moved beyond money, with machines that replicated food in seconds. The motives for the main character’s adventures were to “Explore strange new worlds.”

In the Dumarest books, human motives arise out of competing economic interests and political allegiances. Money is many times central to the plot as a down on his luck Dumarest must take dangerous jobs for mysterious patrons. The technology of these books has no routine teleportation devices or instantaneous food replicators. The technology of Dumarest means an increase in the distance one can travel, not in the transformation of humanity into a virtuous being.

The Traveller setting is like the hardscrabble one in the Dumarest books and nowhere near the optimistic Star Trek Universe.

Now, in both a coming home and a full-circle cycle of influence, Burnt City Games is developing a table-top role-playing game based on the Dumarest books. Game Industry News caught up with the developers at the Travellercon/USA in Lancaster, Pennsylvania. They were playtesting their game, and we were able to get them to answer some questions.

GiN: How did you work with the Dumarest Estate to obtain the rights to the property?

After spending a few hours searching online for who owned the rights to the Dumarest stories, we began reaching out to the Tubb estate in October 2021. We all love the Dumarest series and feel Tubb is an underread writer who deserves greater representation in sci-fi and a wider recognition. We just felt that besides a film or series, a game presents the perfect setting to highlight the world Tubb created and to help spread the word. It was with this mindset that we went into the talks with the estate. Then it wasn’t until May 2022 that we finally secured the rights officially after convincing them of the project.

GiN: Marc Miller has also worked with you in this endeavor. How did this happen?

This actually was connected to how we were able to convince the estate to work with us. They already knew Traveller existed and cited Tubb as an influence, and they worried that Marc might think we were infringing on his game. We figured the best way to solve this problem was to just reach out to Marc directly with what we were trying to do and see if we could get his blessing. We ended up getting a lot more than just that. Instead of just his blessing, Marc has become a mentor and advisor to us in the development of the game, even going so far as to allow us usage of the Traveller Classic system to build our game off of. Marc has been an invaluable resource, and we are so grateful and lucky to have him on board.

GiN: Who are the people involved in creating this game?

Dominick Santa Cattarina is a history teacher, writer, game designer and co-founder of Burnt City Games who was introduced to roleplaying through AD&D 2nd edition back in middle school and has been gaming ever since. He enjoys games that are narrative driven and also focus on player’s agency. He and his wife are both avid board gamers.

Jordan Gwiazdowski is a game designer, writer and co-founder of Burnt City Games. He grew up listening to the “Hitchhiker’s” BBC Radio Series and reading pulp novels. His core design belief is that you can have strong mechanics, and they should facilitate dynamic storytelling and gameplay.

The third man I talked with said that Matt Cipriano is the current name he goes by. He has decided to plead the 5th on all else. He is also a co-founder of Burnt City Games. He likes animals that are hairless because they feel “like real people.”

GiN: What drew you to this property, and are there future plans for this or any other products?

With Traveller being our introductory material, being the geeks that we are, we delved deep into Traveller’s Appendix N and the source materials listed. We found a deep connection with Dumarest and the richness of the universe in the series. The Dumarest Saga presented more than just a story of a man searching space for a mythical planet that he believed to be home, but a robust and dynamic universe and social ecosystem ready to be explored.

The breadth of the universe created by Tubb is a perfect setting for a game like this with so many opportunities for expansion and growth. The complex interpersonal relationships and dynamics of the universe presented will allow for this game to grow and build beyond its initial release.

For now, Burnt City Games is still in its early stages of development, but we have some games in the development pipeline, as we look towards expanding Dumarest into a board game, as well as building out and developing other RPGs based on existing IP’s as well as developing our own in-house systems and settings.