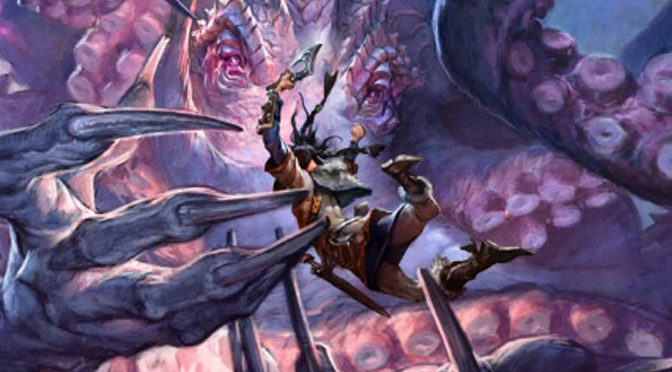 Hey everyone, I’m back with another book in the Pathfinder Tales universe! It’s Starspawn, Book 02 in the Jendara series, by Wendy N. Wagner!

Plot Synopsis: Once a notorious Viking and pirate, Jendara has at last returned to the cold northern isles of her home, ready to settle down and raise her young son. Yet when a mysterious tsunami wracks her island’s shore, she and her fearless crew must sail out to explore the strange island that’s risen from the sea floor. 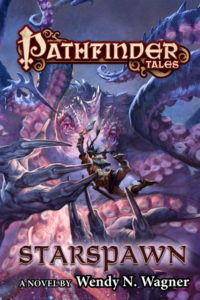 Plot: The plot of this sequel to Skinwalkers is pretty intense from the beginning to end and I enjoyed it quite a bit. There is one tiny nitpick I have and that is that Starspawn takes place about a year after Skinwalkers, so Jendara and Vorrin ended up getting married in the time between books. I’m not saying it should’ve been included in the books, but I was definitely confused at the first mention of Jendara’s “husband” since in the last book her previous husband was already dead for many years.

Characters: We get introduced to more of Jendara and Vorrin’s crew in this book and I have to say I really enjoyed the heck out of meeting all of them. That being said, out of the newcomers Zuna was my favorite of them. It’s most likely because she doesn’t flat out trust Jendara, who has only in the past few years stopped being a pirate and is trying to repent for her crimes, and I enjoy having thoughtful characters acting as balances to protagonists.

Kran, Jendara’s son, is probably my favorite character in the book as a whole probably because he’s growing up and doesn’t like to be treated as a child anymore and wants to have his own adventures. I enjoy seeing a character who was relegated to a side role in previous books getting some much deserved spotlight.

Overall: If you enjoy nautical adventures, or just plain old adventures in general, Starspawn is definitely a book for you. Starspawn releases on August 9th, 2016 so get ready to grab a copy!