Captain Christopher Pike holds a special place in the Star Trek Universe. He was written as the Captain of the Enterprise in the pilot episode (called “The Cage”) for the original Star Trek TV show. Also, his first officer, called “Number One” was a highly logical and expressionless woman. When NBC rejected this pilot a new Captain was written into the show and the logical, emotionless “Number One” was written out of the series. Gene Roddenberry used some of the footage and the character of Pike in the first official episodes (called “The Menagerie Part 1 & 2”). Since Spock was in both the pilot and the original series, the creators of the series used the story of Pike as back-story for the Star Trek Universe.

This may have helped these first episodes win the Hugo Award.

Pike is now the Captain on the new Star Trek TV show Discovery for its second season. This novel takes place right before he becomes its Captain. He is on the Enterprise with Spock and they are sidelined from the Klingon War. The character of “Number One” has also been resurrected. 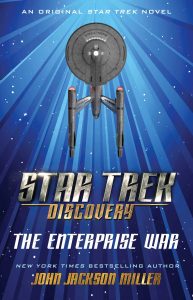 The novel “The Enterprise War” gives the reader an adventure that occurs off to the side of the Klingon conflict. It concerns a war between two alien races, the Rengru and the Boundless that the Enterprise ends up being drawn into. It is not a straightforward narrative, with each chapter each taking different character viewpoints. It is further disjointed because crew that has been separated from each other in the chaotic war.

One interesting element of this book is that the alien Rengru. Unlike most Star Trek aliens they are not humanoid or even human in personality. They are so alien the only way they can truly communicate is through the more human like characters of the book.

[amazon asin=1982113316&text=Find out more about the amazing Captain Pike with a copy of The Enterprise War from Amazon!]

Another “alien” that comes across as more “human” in this book is the character of Spock. This has interesting parallels in that the Spock on the original pilot (“The Cage”) was more emotional than the character in the original series. Whether this is intentional or not, I do not know, but it does follow more of the way Spock is portrayed in the show Discovery.