Rise of the Federation:
Live by the Code

Rise of the Federation: Live by the Code is very much a Star Trek: Enterprise novel and not merely in light of the subject matter. Rather, Christopher Bennett has done a remarkable job of capturing the feel and the sometimes-odd pacing of the series, and if you enjoyed Enterprise, then you will likely enjoy Bennett’s continuation of the series.

If you did not care for Enterprise, just pass on this book and the other books around it. Certainly, there are stories written featuring characters that transcend their source material. Live by the Code is honestly not one of those stories, in part because it builds upon previous works in the series, Rise of the Federation. Live By the Code is currently the last novel in the series with Patterns of Interference expected in August of 2017.

The events in Live by the Code are shaped by the events in previous novels, and while Bennett does a creditable job providing context for those events should the reader have skipped to the end of the series, frankly, I would have preferred to have read the previous three novels before picking up Live by the Code as some of the references are not entirely well explained. Also, Live by the Code pulls extensively from ST: ENT episodes “Dead Stop,” “The Augments,” and “Affliction” with some nods to “The Breach,” but previous viewing of the episodes is not required for following the events of the book, though it is certainly helpful with respect to the Klingon chapters. 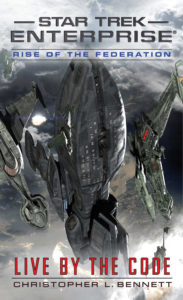 Live by the Code features roughly three story arcs that ultimately coalesce into the typical battle for literal worlds. The first, and the most enjoyable arc, features the Ware, which is the name for the technology from “Dead Stop,” though Malcolm Reed is now a captain and heading up a task force to halt the spread of the automated technology throughout the fledgling Federation, though the bulk of the interaction features an entirely new crew of Andorians from their own Enterprise, dubbed the Vol’Rala. The characters are pithy, combative, and generally the snarky Andorians that ST:ENT taught us to love, with Captain sh’Prenni starring as a break out favorite.

The second arc is Phlox-centric, involving the marriage of one of his daughters to an Antaran, bringing to the fore the troubling tensions between Denobula and Antar resulting from the war sketched out in “The Breach,” and the third arc involves a battle for control of the Klingon empire featuring the ridge-less Klingons from “The Augments” and “Afflicton.” Bennett deftly weaves all three arcs together and writes a creditably explosive conclusion to the novel, and I will not spoil how he does it. I will admit that I believe the novel would have benefited from more even pacing of the action sequences throughout the narrative.

Explore the rising federation with a copy from Amazon!

Because the story in Live by the Code borrows from so many sources, it is an exposition-heavy book, resulting in a very slow first third that begins marginally picking up in the middle of the second third, which can be discouraging to some readers. A case can be made that the final third of the book makes up for the interminably slow pacing, but trudging through the Klingon sections is at times more difficult than managing to sit through an entire Klingon opera. Of all the character-specific arcs, the arc featuring the Klingons fares the worst with Bennett’s heavy-handed use of expository interludes because Klingons, by their natures, are not prone to expository interludes, a fact which unironically becomes a minor plot point.

Most of these expository asides feature almost inappropriately timed musings on romantic relationships, and while I could lay the blame Bennett, he really is following accepted protocol from the series. “United”, I’m looking at you. The interludes featuring T’Pol are particularly uncomfortable. The other primary sin Bennett borrows from ST:ENT is that he name drops from characters that appear in other series—look for a Paris and a La Forge in particular, and while I understand that Enterprise’s writers and perhaps Bennett himself mean for these to be Easter Eggs nodding at the rich canon that follows Enterprise, they fall flat more often than not.

Despite all of the foregoing, Live by the Code takes the opportunity to explore the more difficult ramifications of inter-species unity, and not just ST:ENT but Star Trek generally is at its best when the show asks tougher questions about our own assumptions from “The Galileo 7” to “The Outcast” to “Melora” to “Cogenitor”, and make no mistake, Live by the Code does just that. Thematically, the story grapples with the nascent Federation’s arrogance and juxtaposes it with that of the Klingon Empire while simultaneously questioning how both groups handle interacting with an Other.

The questions asked are difficult, and neither group comes to a truly satisfactory solution, but there remains a certain amount of hope at the end of the novel for both. The conflicts are messy and complex, more so even than the characters realize, and the story told is far from that of the Federation’s finest hour. The true thematic heart of the work is best encapsulated by the events surrounding Vaneel’s wedding on Denobula, which also grapples with concepts of embracing the Other-as-anathema in the sense that Vaneel’s wedding kicks off violence on both Denobula and Antar from radical supremacist groups. Despite the violence and loss, the arc finishes with forgiveness and empathy, which is an incredibly timely message and wholly appropriate to Star Trek.