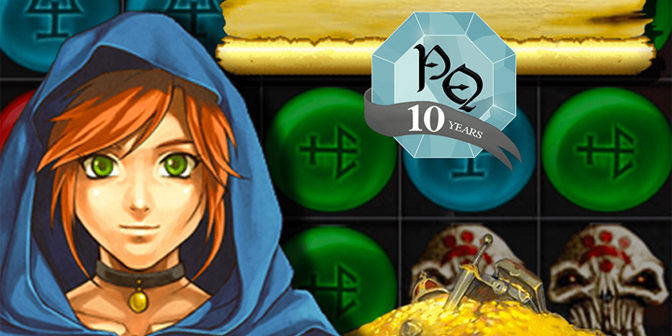 On this day (March 20, 2007), Puzzle Quest was first introduced to the world with the launch of Puzzle Quest: Challenge of the Warlords on Nintendo DS and Sony PSP by D3Publisher (developed by Infinite Interactive). With this launch, Puzzle Quest: Challenge of the Warlords became the original match-3 RPG and with its innovative gameplay and fanfare, the game went on to win numerous awards, including Best Downloadable Game at the Interactive Achievement Awards. For many, the battle to acquire a copy at launch was a challenge due to the popularity and limited quantity but the game finally became available everywhere in both stores and digital release. 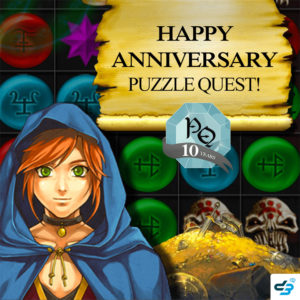 Since the launch of Puzzle Quest: Challenge of the Warlords, where players became victorious in their battle to save the Kingdom of Etheria from the evil Lord Bane, new iterations have launched on PC, consoles and handheld devices including, Puzzle Quest Revenge of the Plague Lord, Puzzle Quest Galactrix, and Puzzle Quest 2.

In honor of the 10-Year Anniversary, the following special offers are available for a limited time:

• Magic: The Gathering – Puzzle Quest will provide all players with 100 free Mana Crystals that log into the game today, and there is a special sale that provides players 2 free Super Packs (sale ends March 26).