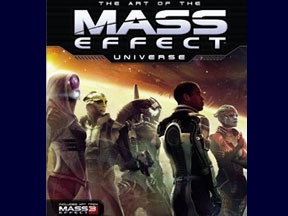 The Art of the Mass
Effect Universe

As someone who thinks Mass Effect and Mass Effect 2 are among the most beautiful games ever released, I was interested when I heard that BioWare and Dark Horse planned to release a book on the art of Mass Effect. If anyone reading hasn’t had the chance play either of the first two of the planned three game trilogy, suffice to say that hundreds of artists spent approximately eight years creating a stunning, immersive universe full of different races, worlds, and technology. When the folks at GiN, who know I’m interested in art, asked me to review it, I of course said yes.

First, the positives, of which there are many. The book includes art from all of the games, including Mass Effect 3. The artwork covers, but is not limited to, major characters, races, worlds, ships, technology, and weaponry.

While every topic is not covered with the same level of thoroughness (the book would have to be five times as thick if that were the case), there’s a load of imagery here. For a character, you can expect everything from rough sketches, inked drawings, work in progress renderings, and the final, full-color version of the figure, typically from multiple angles.

Each subject also includes an interesting, insider-like blurb. For example, one page mentions that an early concept of Zaeed Massani featured both an artificial leg and a canine companion. Ships are well covered, with views from multiple angles (sometimes as sketches, sometimes as final, full-color renderings), as are the various and interesting bits of technology that appear all through the games. I found the artwork on the worlds, particularly those we’ve yet to experience from Mass Effect 3, of particular interest. The images from the Asari home world of Thessia stick out for me; the full-color picture of the temple interior is gorgeous.

So what does the book not have? While a great visual guide to the art of the Mass Effect universe, it focuses on the visual development of the game – if you’re hoping to learn more about digital art in general or if you’re an artist interested in improving your technique, you won’t find much insight here into how the art was actually created. This book clearly wasn’t intended to serve as a textbook, but targeting, say, a specific character for a more comprehensive look at the art process, from initial sketch to game-ready rendering, with info on media, software, etc, would have been interesting and educational for even non-artists. Background bios and opinions from some of the artists involved also would have been welcomed.

But that aside, the book is a visual treat for anyone who loves the Mass Effect games, and I highly recommended it. The approximately 9×12" hardcover, which retails for under $40, was released in comic shops on February 8th and in bookstores on February 21st. Check it out!