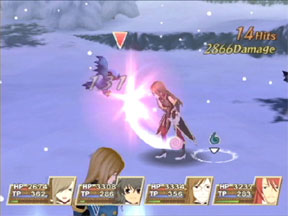 Tales Of The Abyss

Tales of the Abyss is Old School And New Cool

Tales of the Abyss was actually the first role playing game I got to play for the 3DS, so I was excited. Before the main menu appeared there was a fairly short opening movie that was really adrenaline-pumping. It showed all the characters I’d be using, without giving away much more than their appearance.

When the game started I really enjoyed the smooth crisp graphics. Once I pulled myself from my trance I met the main character, Luke. Luke is sort of your typical stuck up aristocrat. One glaring difference is the fact he doesn’t remember his childhood and has been locked in his home for the seven years he can remember.

After a few conversations and getting a feel for the game, I met with Master Van, Luke’s combative instructor, and after a few quick battle tutorials a strange woman shows up and there is a bright flash of light. Next thing I knew I was in some grassy valley. It was at this moment this game sorta of reminded me of one of the original Final Fantasy games, just extremely overhauled and not turn based.

As I made my way through the valley I really enjoyed the combat system. It had that old fashioned feel to it, yet since it hasn’t been used a lot by RPG titles it was almost like a new system.

The battle system consists of unhindered, left and right movement, while having you attack with button combinations rather than waiting for a bar to fill. Overall the game play was excellent and while it didn’t have an edge of your seat fun factor, instead it had a "you don’t realize your enjoying it until you look at the clock and realize it’s been six hours" power.

The only issue I really came across consistently is the game really doesn’t give you the funds needed to maintain your people. After seven or so hours of playing I had six people and barely enough money to buy much needed equipment for my four main starters, let alone medical supplies. This really caused issues once I started in on the tough series of boss battles.

Music and audio in this game is top notch. Every melody and especially the chants are great quality. One issue that does worry me a little bit was playing the game through my 3DS speakers. Often times it sounded like the sound was taking a toll on my speakers.

The Tales of the Abyss 3D component was interesting. The colors and battles were much more lively when viewed in 3D. After a few moments though, all the action and flashing got to my eyes and I kicked 3D back off. That may just be me, and I didn’t ding points off for it. If you can play in 3D, it does enhance the experience.

Overall, if you love role playing games of any type, then this game should be on your list. With excellent graphics, neat and stable 3D, and a good story, this game is a must have for any 3DS owner. Because of all of this, I give Tales Of The Abyss a high rating of 4.5 gin gems.