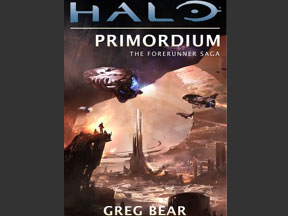 Primordial is the second book in the Halo Forerunner Saga by Greg Bear. It gives some background for Halo 4 and adds to the growing history of this popular Xbox360 game.

A ghost rattling around in a machine tells the story in a flashback. This gives the novel a haunted quality, much like the main character, Chakas, who has ancient intelligences that possess him at various points in the story.

"Lord of the Admirals" is the principal being that Chakas caries within his consciousness. This ancient soldier pushes Chakas to travel the revolving ringworld (Halo Installation 07) and explore it for some unspoken purpose. Those familiar with the series will see the familiar Forerunner technology answering humanities needs while also raising concerns on its hidden costs.

The book does not have a typical hero on an epic quest. Instead it is more of a gothic mystery merged with science fiction. The revolving world of Halo Installation 7 is a doomed world of ghosts, a family of Forerunners, who are replaying historic struggles through human actors.

Another symbol of this ancient past haunting the current residents is the chthonic creature kept in stasis that the characters encounter at the end of the book. It would have been easy to write these creatures as beyond human understanding, but Greg Bear writes his aliens as understandable, with complex and overlapping motives.

Greg Bear keeps faithful to the game’s universe. In his novel humanity exists in an old universe where previous aliens have left titanic death-dealing artifacts. The origin of artificial intelligence 343 Guilty Spark from Halo 3 is explained in a plot twist that sets the stage for Halo 4. Another Forerunner artificial intelligence, Mendicant Bias, also appears.

Like most ghost stories, this book portrays how the persistence of memory haunts the living. Unlike most ghost stories, these memories are presented on a galactic scale. A character introduced in Bear’s previous book of this three-part Forerunner Saga, the Librarian, is the one who placed these Forerunner ghosts inside the human hosts. She does not come across as a demonic creature in need of a space age exorcism, but instead, as a spirit whose motives are good but whose methods make for a troubled journey to this newly rendered Halo.

Greg Bear wrote on his website that lots of revelations would occur in this book and he fulfills his promise. Books like this confirm that the lines between fiction and gaming are increasingly blurred. Reading the book adds to the game just as downloadable content does. This is a must read for Halo fans looking for deep background.