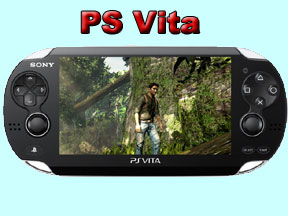 The PlayStation Vita hit shelves last week (for most of us at least) and after spending some quality time with Sony’s new handheld, I’m a little confused about my feelings for it.

Let’s go ahead and get the bad stuff out of the way now instead of later.

First of all Sony has confirmed that they won’t be bringing the UMD redemption program from Japan to America. That’s right everyone, big surprise, but Sony screws us over again. That being said. the best bet for easing this blow is to jump online and start selling all your PSP games since they can’t be played on Vita and the UMD redemption program won’t be coming stateside. Then you can buy all of those games again as digital downloads for the Vita. It’s a bit of a slap in the face from Sony, but it doesn’t ruin the Vita.

My next complaint is a bit bigger than the Vita having what I call limited backwards compatibility. This time we are tackling the subject of Flash. As of right now, the Vita doesn’t support Flash Player, which means no YouTube. Almost all smart phones support Flash, but Sony’s new powerful handheld doesn’t? Yeah it seems like a bad move on Sony’s part but they’ve promised to look into it. Hopefully we’ll see YouTube in the next couple of Firmware updates.

Another couple of features that are missing are Skype and Internet Radio. I understand why Skype is gone. Sony has their own version of audio chat, so why would they include a third party audio chat program? Fine. But the lack of Internet radio is inexcusable. Maybe I wouldn’t care so much about the radio if it wasn’t for the fact that Sony’s new memory card is way overpriced. A 32 GB memory card for the Vita is going to hit your wallet for $100! For the same price as the PS Vita 3G version you could buy the Uncharted PS3 Bundle that comes with the 320GB console and Uncharted 3!

It’s a little preposterous in this day and age for Sony to be charging this much and I can only hope that the price will lower soon for the sake of the average consumer.

Alright now let’s talk about my problems with the PlayStation Network. PSN offers a wide variety of features when logged into it on a PSP, but it’s just the opposite on the Vita. Missing from the Vita PSN is a couple of big features.

To start if off the Vita PSN doesn’t support digital comics. Sounds like a sham I know. I mean we finally get a system where we could use the touch screen to turn the pages of our favorite comics only to have them ripped away from us? Just like YouTube, this is one of those cases where Sony assures us the features are coming, but just aren’t ready yet.

This next PSN problem is a bit bigger than a few pages of superheroes missing. To go along with the missing comics, the Vita is also lacking support for PSOne Classics. Really Sony!? You start off the Vita launch by letting everyone know that you won’t be allowing it to support PS2 Classics and then you take it one step further by not having any of our PSOne games available for us to play?

This next complaint about PSN might only be specific to me but feel free to e-mail me and let me know if anyone else is having this kind of problem.

I’ve bought a few movies and TV episodes back on my PSP and when I got on my Vita I thought "Hey I should download and watch this since it’s been so long and I have this new device to run it on." Here comes the problem though, PSN doesn’t remember any of my video purchases. Instead when I went to download an episode I was informed that I had to pay for it again. I’ve checked and made sure my Vita was activated for both video and game use and I’m logged into the PSN account I used to buy the content so why is it gone? Maybe I’m just one of those that slipped through the cracks at Sony headquarters but I’m not happy about it.

I think that’s all I have to complain about. Let us move onto the advantages of the Vita.

Interface wise the Vita is very user friendly. The touch screen combined with the easy to navigate menus makes moving through the Vita an enjoyable experience. Probably the best addition to this is the ability to easily switch between applications without closing one out. For example, while playing Marvel vs. Capcom 3 one of my friends sends me a message that we should play together. Instead of having to close down MVC3, I hit the PlayStation button and switch back to the main menu. At this point I load up the Party app and we can now talk to each other while we play via the built in microphone on the Vita, then I simply switch back to MVC3 and it picks up right where I left off. Cool!

Speaking of that microphone, I’ve got to give Sony props on it. Using Skype on the PSP with its built in microphone was a nightmare at best. The Vita may not have the best microphone in the world but it’s easily works well enough for on-the-go gaming and chatting. Also in case the built in microphone isn’t doing it for you, the Vita is also compatible with Bluetooth headsets as well.

Not to be left out are some of the more noteworthy applications the Vita supports. Like Netflix, which has been a long time coming. Netflix is the biggest and best application in my opinion but there are also apps for both Facebook and Twitter as well (so you can keep up with GiN on the go!).

Enough about the interface though. How does the system itself feel?

Well I’ve got to say that the Vita is kind of big. I know this comes with the 5′ screen and I’m okay with it. Despite just how big the Vita is it doesn’t weigh much. The only real problem was when my wife was playing with it and found that she couldn’t reach the center of the screen with her thumbs. It’s a small inconvenience that is easily worth it for the screen size.

Finally we have the one feature everyone was looking forward to, Dual Analog Sticks! Not little hard-to-use nubs and not just one analog stick but two fully functioning analog sticks. I shouldn’t be so excited about this, to be honest this should have been on the PSP and only Sony know why it wasn’t. Maybe it was all part of their plan to make us appreciate their next handheld more. If so it’s worked. I can’t begin to tell you just how nice it is to have two analog sticks instead of one. It opens up a whole new world of gaming to handheld publishers. Sure the PSP had first person shooters but they were always clunky because of the lack of that second analog stick. Now though we have the ability to fully enjoy gaming on the go. Add in the extra feature of being able to game with friends on the PS3 and the possibilities are endless.

Let’s take a look at the new game cartridge Sony is using for Vita. The PS Vita uses the appropriately named PS Vita Card for its games. The real advantage of this is that these new PS Vita Cards have space saved back on them for game save data and patches. Also the cards are easy to carry around and store because due to their small size and ability to not be scratched or break apart like UMDs. Raise your hand if you ever had a UMD split open on you while pulling it out of its case.

The price is about what was expected. A wi-fi only model can be found for $249 with a 3G model costing about $299.

Looking over the pros and cons, it’s easy to see that Sony has released a wonderful little handheld. Sadly it’s also easy to see just how much got left out in the rush to release the Vita. With many features missing that were present on its predecessor, it’s hard to justify buying a PS Vita right now. I like what Sony has done here, but I’m afraid that the Vita is still in its prototype stage and that we’ll be seeing a PSV Slim or 2000 or whatever you want to call it within a year. Hopefully I’m wrong and everything will be fixed through Firmware updates, and if it does then by all means pick up the Vita ASAP, but I can’t help but to be untrustworthy of Sony. Still it’s ultimately up for each individual to decide if the Vita is worth it or not.

For me the Vita is a little bit of a disappointment, but within the next couple of months may be worth it. Vita gets 3 out of 5 GiN Gems from me because while it’s a great piece of technology, I can’t help but feel like it was released unfinished.