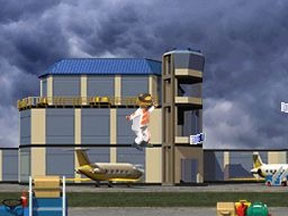 It seems like these days it’s hard for parents to find a good game for their children. Most games are either too short and the kids are done with them in a day or they’re simply not fun enough to hold the child’s attention. And other than for some questionable controls, Top Agents might be a game that works for both parents and kids.

The story follows a group of secret agents as they try to put a stop to Dr. Wicked and his plans. Using an agent as your main character, you get to name them, you travel all across the city in search of stolen gear. In order to retrieve your stolen items, you must search everywhere from warehouses to secret lairs. It’s almost like James Bond meets Lego, in a new style of game.

At first the game was really entertaining and was quite enjoyable to play. Nothing hindered me from knocking out the first few missions early on. After that I got to drive around in my spy car, but then the flaws started to creep up a bit.

The driving controls don’t work well at all…period. When driving, it will only let you turn in one direction. At first I thought it was because I was using a 3DS, but I’ve never had a problem playing any DS game. This flaw is a game stopper, if you can’t drive then you can’t reach your destination or defend yourself properly.

Just to get to my seventh mission, it took me fifteen minutes when it should have only taken two at the most. If not for this massive error, this game would be a great title. The graphics are good and it has the Lego kid-friendly atmosphere to it. And with over eighty missions, it has the depth to keep a child entertained for quite a long time.

Combining with the great graphics is near perfect audio. Background music and sound effects are in perfect balance with one another. Each sound effect helps enhance the atmosphere.

Overall this game was on the edge of being a "must have" for children of all ages. However due to the car problems making things much worse off than needed, I can only gave the game 3 Gin Gems out of 5. The thing is that the rest of the title is so good, that you may even be tempted to push through the left-turn only problem, but you shouldn’t have to do something like that to enjoy an otherwise great game.

Currently, the game only seems to be available in Europe, which is fine. Hopefully they will clean up some of the flaws before it makes it to America.