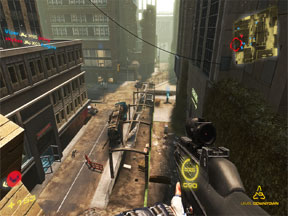 Nuclear Dawn huh? Let me guess. Another game following in the Fallout fad of post apocalyptic worlds that have been plaguing the game market. Okay then, Nuclear Dawn, here is your chance to prove me wrong about the genre.

So as it turns out, not all games that jump on bandwagons are bad followers. Nuclear Dawn is quickly becoming notable as one of these that break the trend. The basic idea of Nuclear Dawn, in case you haven’t guessed, is that the world is in shambles and now two military forces are battling it out for supremacy. I know it isn’t exactly the most original scenario, but work with me here. The backdrop of Nuclear Dawn isn’t what makes it a fun ride. So what does make it so enjoyable?

It’s the gameplay. Nuclear Dawn is one of those games that was spawned by a mod crew having fun with Valve’s Source Engine, and it struggled and fought its way to a full game release. So being that it uses the Source Engine it’s a safe bet to say it’s a shooter right? Well…yes and no. Yes Nuclear Dawn is a first person shooter. No that isn’t all there is to it. Let’s talk about that shooting thing first though.

As a shooter Nuclear Dawn isn’t a bad game. There are four different classes to play (just don’t forget the support class) and each class has their own set of loadouts that can be used. This leaves us with close to ten different custom classes that we can go into battle with and it gets even more in-depth as we can fine tune the loadouts to better suit the our gameplay style. Classes and loadouts have become a standard in the FPS genre, so it’s a good thing Nuclear Dawn didn’t try and skimp on them at all.

The actual gameplay of Nuclear Dawn is assaulting and defending choke points on the map to give our team the advantage. Each of these choke points will give resources to the controlling team which are used in that other aspect of gameplay I’m going to talk about in a hot second. The main goal of all this is to push the enemy far enough back that we can infiltrate and destroy their base. Pretty simple stuff, right?

Let’s talk about that other part of gameplay I’ve been mentioning before we decide its "pretty simple stuff." Nuclear Dawn is also and RTS as well as being a FPS. Kind of surprising isn’t it? Not many developers would think to bridge the gap between the hardcore testosterone filled world of the FPS and the calmer tactical field of the RTS. The RTS element is surprisingly enough what makes the game so enjoyable.

For example, let’s look at the average game which lasts around 45 minutes and is played online with others. We start out by building the very necessities with whatever limited resources that we have. Then we play the waiting game as all the other players run around and hold and assault choke points so that we can gain the resources needed to build more constructs. We build our way up to these choke points and secure them with turret defenses and respawn points so that we don’t have to worry about them. Then we continue to move forward listening to what the troops on the field are requesting, and trying to build to satisfy them.

This is level of communication is what makes Nuclear Dawn stand out from the crowd. There isn’t anything better than hearing the Commander and the foot soldier arguing over where certain buildings need to be placed. Arguments can continue for almost all game as the Commander does what needs to be done to make sure we win all while listening to the needs and wants of 15 other players. I think one of the best examples of a Commander ultimately getting a foot soldier to shut up and listen was when he killed him by dropping constructs on him a couple of times. It was an amusing sight that reminded everyone on the field of who is in charge, or did it?

The Commander isn’t God. If soldiers are unhappy with the way he runs things, a mutiny for a new commander can be started. With enough votes the once mighty commander is now a lowly foot soldier like everyone else. Well, maybe most of the time the player will just quit if they are booted from being a Commander.

Alright it’s time to move onto the graphics of Nuclear Dawn. Frankly they’re ugly. It’s a post apocalyptic world not a hippie convention! The gritty streets, destroyed buildings and general lack of color is exactly how a post apocalyptic world is supposed to look. Even if the theme is overused, it doesn’t change the fact that Nuclear Dawn still does it right. Though I do have to wonder how interesting a FPS filled rainbow death beams and guns that shoot flowers would be. Some indie developer should jump on that.

Audio in Nuclear Dawn is the standard gunfire here, explosion there type. There isn’t anything wrong with it, but it doesn’t exactly standout either. Music is limited to a victory theme and a few menu pages, so no dice there either. It’s okay though because when a whole team is trying to communicate to a single person the extra bit of noise could get in the way and it does make the world feel deadlier for sure.

Nuclear Dawn is a great example of what happens when developers think outside the box and take a risk. I’m glad to see that the normal genres are getting mixed up a bit, and hope that these small but notable revolutions to the game industry continue not only for my jobs sake but for the enjoyment of the players.

Nuclear Dawn captures 4 of our GiN Gems out of 5!