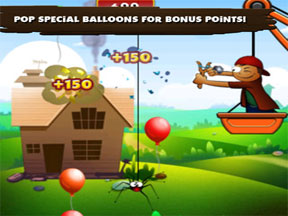 Are you tired of always shooting to kill in your games? Ever feel like shooting to, I don’t know, pop something besides someone’s skull? Well if you’re up for a little non-violent shooting fun, check out Popping Mania from Jump Games at the App Store.

Popping Mania has simple game controls. With your right hand you raise and lower a boy in a box, crate, sled, etc. that’s slung from a crane. With your left hand you tap the screen for him to shoot various balloons as they scroll up the screen.

His weapon of choice? A slingshot. No not some crazy complicated sling shot like the ones in the bow section of a sporting goods store, an old school sling shot like your grandfather always wanted when he was a kid. Only his mother wouldn’t let him have one because she thought he’d shoot his brother’s eye out or cripple the cat.

At first, the boy just shoots rocks. You get a set number of rocks to pop the balloons. Black balloons speed up the balloons while rainbow balloons slow them down. Other items fall from the sky while the balloons float up from the ground. Different types of birds also fly across the screen. There’s a lot of stuff to pop.

I suppose with killing the birds and the spiders and what-not, the game isn’t completely non-violent, but as video games go, this one is pretty benign. There are specialty balloons that require you to switch to specialty ammo for added difficulty as the levels progress and here’s a tip, the coconuts fall down faster than the balloons rise.

If you’re looking for a game that’s challenging without being completely crazy-making Popping Mania is a good choice. For instance if you find it annoying to try and remember how all those stupid pigs are stacked up in Angry Birds, one of the joys of Popping Mania is that everything you have to shoot is on screen with the shooter.

For a change of pace, the setting changes between levels. Why there is a crane holding a container with a kid in it in all these levels, I’ll leave to your imagination. Whatever the reason, the end result is a fun game that’s easy to pick up and not too impossible to master. It’s a good way to kill a few minutes (or a few hours if you’re the obsessive sort.)

The graphics are simple but clean. The soundtrack is blissfully devoid of obnoxious carnival music. The popping sound when you take out a balloon is very satisfying without being annoying and the applause when you finish a level is pleasant. Think golf crowd not rock concert. With its 99 cent price tag, it’s high value for low cost.