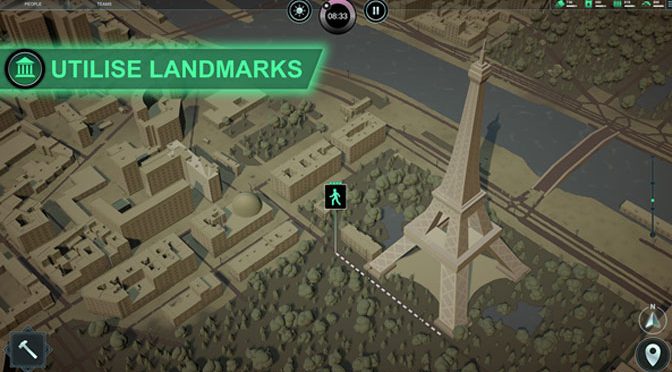 In Infection Free Zone the whole world as we know it today, mapped city by city and building by the building is your playground. You’ll be able to use the OpenStreetMap’s real-world data to choose any city which you’ll adapt according to your survival needs, building shelters, powerplants, entanglements, or even farms. Anything that will allow you to last as long as possible while fighting the infected at night and protecting your base from the living during the day.

“The Mad Virus” came out of nowhere and spread throughout the world with the speed of jet planes. Most people were lucky as it caused their hearts to stop, and just like that, they were gone and didn’t have to worry about what the world would turn into after all hell broke loose. Others were less fortunate, going completely mad once infected and becoming incredibly aggressive toward just about everything. As a result, it didn’t take long for entire societies to collapse, followed by evacuated cities and deficiencies in essential resources like electricity, water, and food. Yet, the truly doomed are neither the dead nor infected, but the ones who survived. The ones like you, forced to live on and try to rebuild whatever is left of the civilization we once knew.

Infection Free Zone is a base-building, city rebuilder strategy game set in a post-apocalyptic world of the future. Become one of the apocalypse survivors. Take the lead of a group of those still alive and mentally healthy from your city and try to establish a new “Infection Free Zone” that will allow you to make it through the night. Scavenge for resources, fight the infected, and defend your base from other survivors’ attacks. Consider anything and everything that might increase your chances of living and rebuilding the world as you knew it.

• Rebuild any REAL CITY in the world. Use OpenStreetMap’s real-world data and choose any city in the world in which to play. Set up shelters and production facilities. Adapt existing buildings to new needs. Build farms and powerplants, and don’t forget to establish defenses with walls, gates, and towers.

• Scavenge for resources. Make good use of your knowledge of the city and find the best place to defend your base. Remember where the grocery stores and pharmacies were. Figure out where to find weapons. Keep in mind that old, devastated buildings might be filled with resources but also the infected lurking in the dark. So, if you decide to explore the ruins, you’d better go well-prepared.

• Fight the infected. Prepare for large hordes of enemies attacking your base every night. Fight them off with every tool available – melee and ranged weapons, vehicles, walls, and even light sources. Choose to research a vaccine or cure that will stop the virus from spreading and ensure your ultimate victory, or simply enjoy rebuilding entire cities.

• Protect your base from the living. Remember that your Zone is not the only one that exists out there. And, while some other groups of people who survived may be friendly, willing to help, and trade with you, others may turn out to be as hostile as the infected.