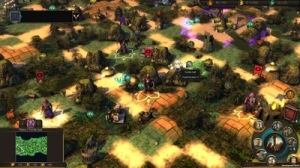 Whoever was waiting up until this point to check out the game now has a perfect opportunity as Worlds of Magic – a 4X turn-based strategy game from Wastelands Interactive, has just been enhanced with a big list of new features and improvements. To try them all out right away jump to the game’s Steam Early Access page.

Gaming on a tablet is your preferred option?  Fear not as we’ve got you covered! The picture below shows the game running on Asus Transformer tablet with Windows, 2GB RAM and Intel Atom processor.

The new, big update for Worlds of Magis has been prepared to thank all those gamers, who voted for Worlds of Magic in the Indie Of The Year 2014 Awards on IndieDB. The first round of voting is now over and our game is in the Top 100! Over the next 10 days you’ll have a chance to vote again, making sure that this spiritual successor of Master of Magic gets a chance to win the Indie Of The Year 2014 Award!

“It really feels great to have our community support us by voting for us in IndieDB’s Indie Game of the Year. It’s a genuine thrill to have made it to the finals. And we have our fans to thank for that. We’re sincerely hoping that you’ll continue this support by voting for us again in the finals,” said Aaron Ethridge, Lead Designer.