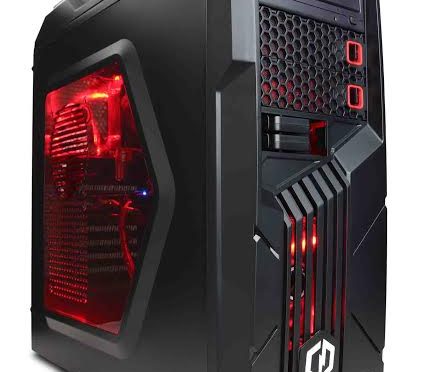 CyberPower Inc., a global manufacturer of custom gaming PCs, gaming laptops, and performance workstations, today announced the immediate availability of its Gamer Ultra VR Desktop — an Oculus Ready gaming system in partnership with AMD and Oculus Rift. The system when bundled with the Oculus Rift headset, will retail at $499 at select online retail partners BestBuy and Amazon. Complete cost of the bundle with Rift headset is $1,099.98.

“This bundle will be the first complete AMD Oculus-ready gaming PC that provides the full experience of VR gaming at an affordable price,” said Eric Cheung, CEO of CyberPowerPC.

The system is fully powered by AMD technologies including the quad-core AMD FX 4350 processor and the all-new AMD Radeon RX 470 graphics card. The AMD FX processor line boasts the highest clock speeds you can get on a consumer desktop PC, with twice the cores and cache memory of similarly-priced competition. Additionally, the Radeon RX 470 includes 4GB of GDDR5, which provides high resolution gaming and VR-readiness out of the box.

The Gamer Ultra VR will also come with 8 GB of memory and a 1 TB hard drive to ensure that customers do not run out of space to store all their VR games and content.

As one of gaming’s newest frontiers, virtual reality has provided gamers with numerous hours of immersive and exciting gameplay. Oculus is a leading brand in the virtual reality gaming industry and among the first to bring modern VR technologies and commercially viable VR hardware to market for the masses with both Oculus Rift (PC) and Samsung Gear VR, powered by Oculus (mobile).

VR gaming has been, until now, limited to only those people who were able to afford high-end systems. With Oculus’ latest software and technology advancements such as Asynchronous Spacewarp, VR gaming is now readily available to more people on a wider range of gaming PCs.

“Less than a year after launching the Oculus Ready program, we’re thrilled to see that the all-in price for jumping into the highest-quality VR experience continues to drop by hundreds of dollars,” said Nate Mitchell, head of Rift, Oculus. “Thanks to the efforts of hardware companies like CyberPowerPC and AMD, more people will have the opportunity to enjoy the amazing games and experiences coming to Rift this year.”

This partnership between Oculus, AMD and CyberPowerPC brings more affordable VR ready PCs and headsets to the larger gaming community. The system offered in the bundle has been extensively tested by both CyberPowerPC and Oculus to ensure that it is perfectly compatible with the Oculus Rift headset and is officially certified Oculus Ready.

The Gamer Ultra VR Bundle will be available for purchase on BestBuy.com and Amazon.com starting January 9th that includes a CyberPowerPC Gamer Ultra PC along with the Oculus Rift Headset.