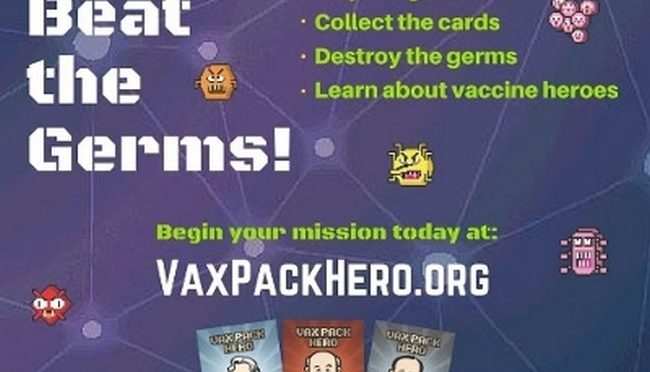 What do Franklin D. Roosevelt, Jonas Salk and 18th century milkmaid Sarah Nelmes all have in common? It turns out they’re Vax Pack Heroes—people who had roles to play in the history of vaccines. Along with some 50 others, these heroes are central figures in Vax Pack Hero, a program created by the Vaccine Education Center (VEC) at The Children’s Hospital of Philadelphia (CHOP). The program consists of a web-based video game, trading cards and an educational website designed to teach kids about how vaccines fight germs.

Vax Pack Hero–a web-based video game, trading cards and website–teaches kids about germs and vaccine heroes
Vax Pack Hero introduces heroes, or teams of heroes, who have been important to the development and success of vaccines. Each hero can be acquired during game play to help players beat the germs and is also featured on a trading card and the website. During game play, the vaccine heroes help players battle 21 different vaccine-preventable diseases. The heroes include not only doctors and scientists who have developed vaccines, but also engineers, authors, politicians, philanthropists, diplomats, and even two small children. In addition to the fun of a web-based game and trading cards, the Vax Pack Hero program aims to teach children that scientific developments build on each other, as well as introducing them to the individuals who used those developments to keep our communities healthy through vaccination.

“Some of the heroes in this project may surprise you, but the success of any discovery relies not just on the scientist who made it, but also on those who came before, those who helped along the way and those who continue to build on it thereafter,” said Charlotte Moser, assistant director, VEC at CHOP. “Our hope is that children who play Vax Pack Hero will have so much fun with the game that they won’t realize how much they’re learning in the process.”

At VaxPackHero.org, children can play the video game, learn more about the vaccine heroes, find out about the germs, order trading cards for a minimal fee and get tips for game play.