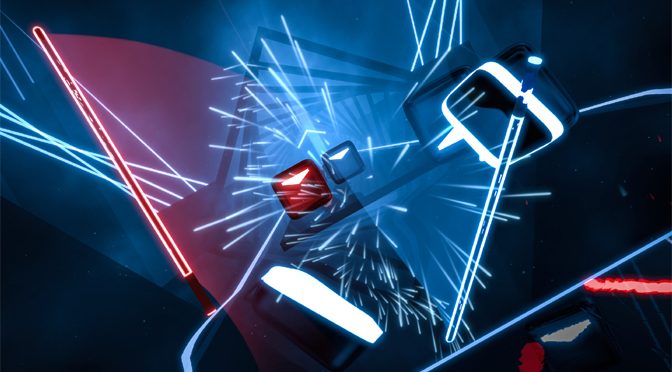 Two news have recently shaken up the peaceful (some would say too much) scene of virtual reality and are going in opposite directions. On the one hand, Facebook buys the studio that created what many consider to be the most relevant game in the latest generation of virtual reality products, ‘Beat Saber’. On the other hand, Phil Spencer, the director of Xbox, explains the whole phenomenon of VR, openly saying that “nobody is asking for virtual reality”.

But let’s take it one step at a time. The studio that Facebook has bought is Beat Games, which is responsible for ‘Beat Saber’, a virtual reality game defined as a mixture of music and action. It’s a pretty precise observation: the player moves around a virtual ‘REZ’ type environment and has to eliminate vector blocks when they hear different types of music, in the sense that they are indicated by arrows and using the two manual controllers as if they were lightsabers. The title has sold over a million copies, but the size of Beat Games is still very modest: only eight employees.

This technology is not only used in videogames, best live casino in Spanish offer games based in virtual reality but there is a lot to do until they are so popular as other games like slots. Lot of industries are trying to implement VR with some success but videogames are not the best example of it.

Fans worry about the actions of big companies

To return to the subject, Beat Games will join Oculus VR, the foundational virtual reality studio (which recently lost its celebrity director, John Carmack), acquired by Mark Zuckerberg in 2014 for over $2 billion. They will continue, however, to maintain their independence and retain their headquarters in Prague. This movement is a result of the recent change of direction by Oculus, which, after funding many independent studio projects to experiment with the company’s devices, has been focusing on a few specific studios to develop powerful titles for the platform for a couple of years.

It remains to be seen what will happen to the many fans who have turned their noses up at the acquisition of the studio, as one of the game’s great attractions was that the studio had released tools to generate levels with any song, something that can certainly lead to legal conflicts if it has more visibility. The Facebook effect can lead both to a radical cut in these mods and to making it easier for many of them to work legally. The company’s attitude, for the moment, is that it “appreciates the value that mods bring to Beat Saber when they are made legally and in accordance with our policies”, and that it will do everything possible to preserve that value.

Meanwhile, Phil Spencer has appealed to proponents of VR by claiming that Xbox Scarlett, Microsoft’s next console project, will not have support for virtual reality because “no one is asking for it. It was in an interview with Stevivor, where he also stated that the VR market is growing very slowly and that none of the games or devices of that nature have a real impact on global sales lists.

In June 2019, Forbes presented a study by Futuresource Consulting in which it stated that with its current rate of growth, by 2023 it would have installed 168 million devices worldwide, generating 98.4 million dollars in sales. This is aided by the fact that Oculus Quest went on sale to the public that same year. There are no official figures, but it is estimated that around one million devices have been sold.

However, is there a sense that virtual reality is not taking off? The report cited by Forbes, while optimistic, acknowledges a significant slowdown in the growth of VR in 2018 and 2019 compared to the 2017 boom. Spencer’s words are not surprising: after the failure of Kinect, it is completely logical that the company should adopt a more conservative position, especially in something that is not so clear about the future, as it was not with the gesture controls. It is not, as the company’s manager says, that VR favours isolation, but rather that the general feeling is caution.

Meanwhile, the rest of the companies investing in VR continue to make strides in development and grow at a more or less reasonable rate: at Steam, the number of connected devices exceeded one million in May, maintaining growth of 80% per year. And their first all-VR game, ‘Half-Life: Alyx’, is already selling almost as a ‘Half-Life 3’ and as a demonstration of the technical virtues of Steam-designed glasses.

Also, at the beginning of the year, Sony talked about 4.2 million Playstation VR helmets sold, and spoke of a phenomenon that had “exceeded its expectations”. Sony is, without a doubt, one of the brands that has most strongly supported VR. It has already confirmed that the Playstation 5 will have support for VR and may even have a new interaction of its virtual reality helmet. Its catalogue of VR games is not going down and will continue to grow fatter throughout next years.