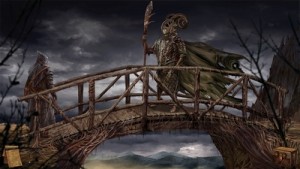 This dark point-and-click adventure game, inspired by the works of H. R. Giger, among others, launches on March 4. At the heart of the game, you will find darkness and surrealism, all finished with an ominous music score.

The creators of Tormentum, bored with conventional fantasy and sci-fi style, ventured to build one of the strangest and most surrealist worlds ever seen in adventure games. If you ever wondered what “Dark Seed 3” would look like, here is your answer.

“We value original and interesting places with the capacity to surprise and amaze. Constructing the various Tormentum locations, we aimed at creating a strange world full of surrealism that would allow the players to explore the game’s universe and interpret it in their own way.”, said Piotr Ruszkowski, illustrator from OhNoo Studio.

A dark hopeless world, inhabited by grim characters and hideous creatures. The player takes control over a nameless protagonist who wakes up one day only to discover he has been locked in a metal cage attached by chains to a large flying machine. The only vague memory he manages to recollect, with great difficulty, is a faint image of a statue of a woman surrounded by a forest of stone hands. Our hero, in search for truth about himself, travels through three lands composed of nearly 80 locations. The dark illustrations are perfected with an exquisite grim soundtrack.

Roaming through the lands, the hero faces moral choices that will impact the course of the game. This way, the developers have been able to create a non-linear storyline and offer various end scenarios, depending on the choices made by the hero.

It is worth mentioning that in 2014, in order to finish Tormentum, its developers managed to collect over $11,000 through a crowdfunding website, Indiegogo. Wait until 4 March and see if the dark world of Tormentum meets the expectations of the players. The full adventure will cost $11.99. The game will premiere on Steam with 20% discount.