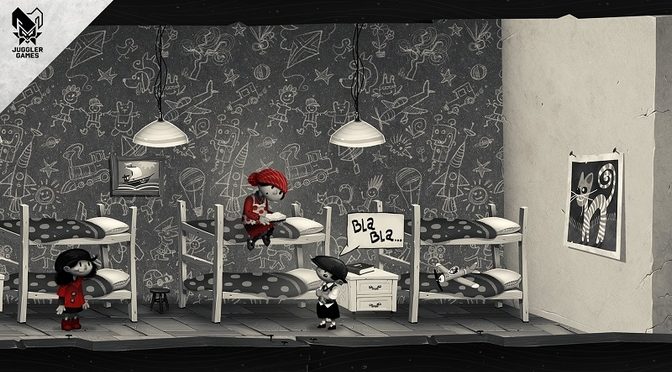 Do you like stories? If so, then I’ll tell you one. But it won’t be just any old story. It’s going to be different, because it’s about real people, about events that are touching and horrifying even now. Let’s go back in time. It all began with a meeting between a boy and a girl who came from two different worlds. For a short time they had good laughs together, deriving joy simply from the fact that they could be together. Unfortunately, all good things must come to an end. War broke out – the Evil King plundered the city and his robot-soldiers were everywhere. Citizens were separated and some of them were marked and forced to move out of their homes and live in a place that was sealed off from the rest of the city by a huge wall. Fortunately the children were not alone – they had each other. Their friendship allowed them to stay together, even though fate seemed to try to tear them apart. That’s the story behind My Memory of Us, a game dedicated those that were separated, but managed to find the strength to meet each other again.

“My Memory of Us is in fact a tribute to our loved ones. We wanted to tell their stories to the world, about their tough childhood experiences; about their nostalgia, their longing for real friendship, and about together opposing the great danger that is war. One day the Evil King simply changed all the rules. He segregated people – some were marked as better, others as worse. He created his own rules and harshly punished anyone who was brave enough to oppose him. Our protagonists don’t agree to this new way of things, to the terror of the tyrant and his army of robots. They decide to find their own paths in this gloomy, yet fascinating world,” said Jakub Jabłoński, Creative Director of My Memory of Us.

The creators don’t deny that much inspiration for the game comes from the events that took place during World War II in Poland. That’s why perceptive players will discover references to actual people and situations. But at the same time, the story told in the game could have happened in a different time and a different place. What makes My Memory of Us stand out is that the story is told from the perspective of two friends who complete each other. Each of them has their own abilities, but only when they work together as a whole can they overcome all adversities. When they’re together, they’re not afraid of robots, prohibitions, and high walls.

“My Memory of Us is a unique production, and we – as a global publisher – are really excited to work with Juggler Games. At the same time, we feel huge responsibility. This is such an important game, it covers such important and meaningful topics – friendship, social exclusion, selflessness. We want it to gain a lot of interest from gamers around the world. The themes of this game are about feelings, which we very often forget in a medium such as games. The style and charm of My Memory of Us will definitely make this a great experience even for more demanding gamers,” said Łukasz Kubiak, cofounder of IMGN.PRO.