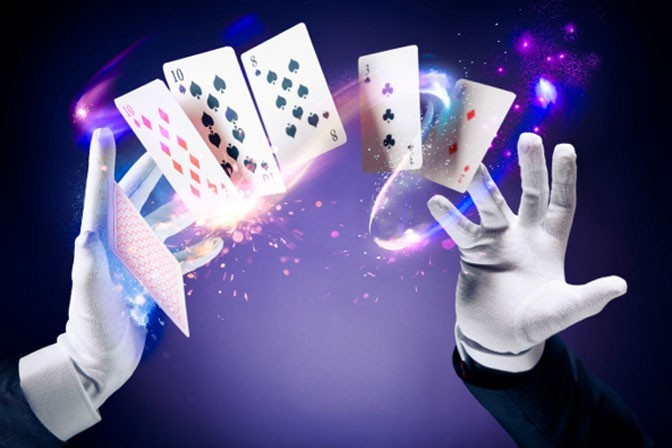 You can unveil a magician’s top secrets with our selection of mysterious slot games to play right now! So, read on to be charmed by these enchanting Slots.

Avid casino players will be familiar with the White Wizard standard slot game brought to you by Eyecon, but the endearing character returns in this epic Deluxe version, with bigger and better gameplay than ever before!

You’ll be transported to the fantastical realm of the wizards, as the golden-framed reels are surrounding by colourful, magical stars. What’s even more impressive, is that this game has an incredible 100 potential pay-lines, which you can pick and choose to bet on. The more pay-lines selected, the more chances there are of winning a spell-binding prize.

The magical wizard is joined by some familiar faces if you’re a seasoned slot player, as the lovely unicorn could award you with up to 1,000 coins. Whereas, the blue dragon acts as the scatter in this game — if he lands on the third, fourth or fifth reel than he will bestow upon you up to 300 times your wager!

The enchantment continues, as this dragon can also trigger the bonus game feature, where you’ll be in with the chance of winning up to 25 free spins! More bonuses are brewing, as the bubbling cauldron icon can award a max pay-out of 3,000 coins! Looking for the right spell to cast? Then the spell book could conjure up a 2,000 coins prize. Of course, these symbols are joined by the classic playing card symbols, but have been given a magical, colourful makeover!

In this slot game, you’re the sorcerer’s apprentice, as the White Wizard himself acts as the wild symbol. When he appears on the first, third or fifth reels, his vast abilities become apparent, as he expands to cover the reel whilst casting the ultimate spell to increase your chances of a creating a winning combination. Join a tale of sorcery and spins with the White Wizard Deluxe game, and discover the bewitching prizes that await you!

Get ready to witness the most glamorous magic show straight from the stage of Las Vegas, with Magnificent Wild! The mystical magician has a few tricks up her sleeves in this slot game, as the six reels and four rows provide you with 20 pay-lines to place your bet on.

Set amongst a glittering purple backdrop, you’ll be mesmerised by the magical symbols in this game, as the reels are filled with wands, doves, crystal balls, and of course the iconic magician’s hat. But you’ll want to pull the Lucky Three Sevens icon out of the hat this time, as these are the most sought-after and valuable of the base symbols.

Where would the magic show be without the elaborate illusionist themselves, and in this game the magician acts as the wild. If she materialises on any of the reels from two to five, then she will replace all other symbols to help towards more winning combinations.

If you’re lucky, she won’t vanish straight away with the Magic Wild Tricks feature, which means she will expand to cover the reel and lock into place, continuing to conjure up those mystic wins!