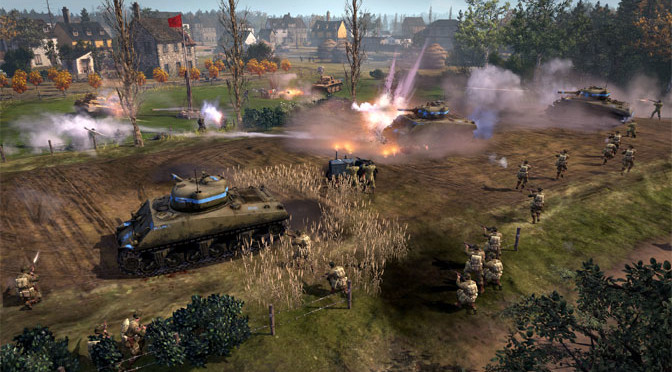 The ESL is joining forces with Relic, the developer of the internationally acclaimed WWII RTS, Company of Heroes 2, to bring the game to the world’s largest esports company’s entry level tournament series: the ESL Go4 Cups. Three full months of Weekly Cups and Monthly Finals for North America and Europe await those who want to prove themselves on the battlegrounds of esports competitions against aspiring players and established pros. All events will feature the best commentators and analysts from the Company of Heroes 2 community.

To help aspiring Company of Heroes 2 players ease into the frontlines of esports contests, ESL is hosting a Kick-Off Cup on December 27 – January 3. The sign-ups are now open – North American players can head here, and European players can register here.

Players will be able to settle scores at a high level of competitive play in weekly competitions which will conclude at Monthly Finals. The Weekly Cups will have a prize pool of $100/€100 for America and Europe respectively, and will run from January 3rd to March 27th, 2016. Three Monthly Finals will see this prize pool more than triple and will award $350/€350 to the winners at events hosted on February 10th, March 9th and April 13th.

Company of Heroes 2 is the latest entry in the highest rated WWII RTS franchise, with more than 10,000,000 matches played online since its launch. Powered by the Essence Engine 3.0, Company of Heroes 2 features some unique mechanics designed to reward thoughtful players. From TrueSight, which emulates the units’ line of sight, to destructible environments and the cover-system that encourages clever unit placement – not to mention the hard and soft counters that will make players think twice before trying to destroy a tank with a simple squad of riflemen – each game challenges gamers with an uninterrupted stream of meaningful tactical choices. Company of Heroes 2 was created by Relic, a Vancouver-based studio known for its AAA strategy games such as the Dawn of War and Company of Heroes series.