Terminator Genisys (the movie) was released two years ago in 2015 and while the sequels were cancelled earlier this year, a mobile game from Plarium with the same name has apparently made it to the Google Play Store and the iOS App Store. Is it worth checking out or should you skip this one? Let’s find out in our review of Terminator Genisys: Future War.

Set in a time where Skynet has already been taken offline and the Resistance is on the verge of collapse, Terminator Genisys: Future War doesn’t really have much story, as is often the case with mobile MMO strategy games. You can take control of either the Resistance or Skynet and try to fulfil each side’s specific goals in the Terminator universe.

Graphically the game is really good and there’s nothing much to improve here. We really like the fact that Arnold Schwarzenegger shows up to guide us! This isn’t really the kind of game where graphics play a very significant part most of the time, but in the bits and pieces where it does matter, Terminator Genisys: Future War delivers. Just don’t expect it to look like a PC game and you won’t be disappointed. 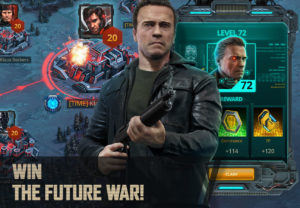 As you would expect from a free to play MMO strategy mobile game, there are an infinite number of tasks to complete, whichever side you choose. It keeps the players engaged and the levelling system is set in a way so that any task which takes less than 5 minutes to complete can be “boosted” without paying. The basic goal is to build up your base, level up your buildings and gather an army for the ongoing war. In order to do all that, you will need to strategically attack the bases around you and capture resources in the abandoned facilities.

The strategy will be yours but the action itself is automatic and the outcomes of the battles are determined by the player’s level and military strength. You can join clans, duke it out in a PvP battle, play solo, team up with other players for an intense PvE battle and much more. The only thing is that the grind may at times seem pointless, and we would have definitely appreciated a proper campaign mode.

Perhaps the biggest pro of this game is the fact that there isn’t anything else like it. While there are multiple other mobile strategy MMO games on both the Play Store and the App Store, none of them are set in the licensed Terminator universe. Add the high-quality graphics, engaging gameplay, the excellent levelling system and the clan system to the mix and we have a pretty good game on our hands.

The only con which stands out while playing the game is the fact that it doesn’t exactly have a story or a campaign. What this does is that it sets the player on a directionless journey. Enjoyable as that journey may be, most of us would have appreciated a bit more in terms of material.

If you enjoy MMO strategy games and you like the Terminator universe, Terminator Genisys: Future War is definitely worth a look; especially since it’s free to play. While the lack of a campaign mode and story integration does hamper the experience somewhat, the barrage of tasks, the levelling system, PvP and PvE battles, alliances, etc. make up for it by keeping the player constantly engaged. Admittedly, Future War isn’t the best MMO strategy game out there for mobile phones, but it certainly brings something for the fans of the Terminator universe to be excited about.

Check Terminator Genisys: Future War out today at its official website on https://www.terminatorgenisysfuturewar.com/.