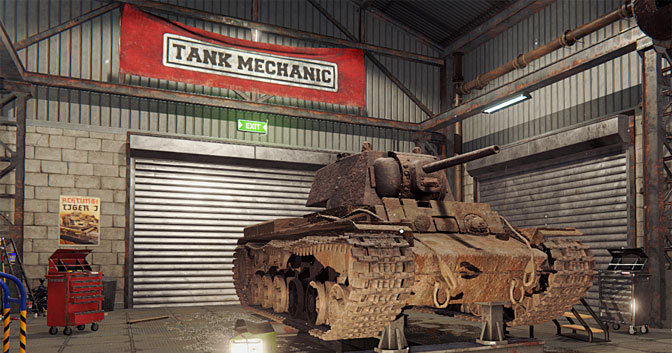 Tank Mechanic Simulator, a unique game about WWII tanks, is making its debut on the Nintendo Switch. The player becomes the owner of a tank museum who recovers damaged and abandoned tanks, in order to restore them to their former glory. The digital launch (Nintendo eShop) has been scheduled for August 27th this year.

The simulator launched on PC in February 2020. The game gained great popularity and has been very positively received by players. Currently around 85 percent of reviews on Steam are positive.

Now Tank Mechanic Simulator is entering the console market. The company responsible for converting the game and publishing it on the Nintendo Switch is Ultimate Games S.A.

In Tank Mechanic Simulator, the player takes on the role of the owner of a tank museum, whose main task is to find damaged or abandoned tanks in order to then repair and restore them to their former glory.

The gameplay consists of finding and retrieving forgotten tanks, and then transporting them to the workshop. There, the player has a lot of freedom to show off his talents when it comes to renovating these tracked vehicles. You can, among others, disassemble rusty elements to later replace them with new ones. Interestingly, you can both purchase and make such parts yourself.

“Tank Mechanic Simulator is one of the most interesting simulators released in the last year. It’s not only a treat for military enthusiasts, but also an interesting alternative for people who haven’t played similar titles so far” – says Rafał Jelonek, COO at Ultimate Games S.A.