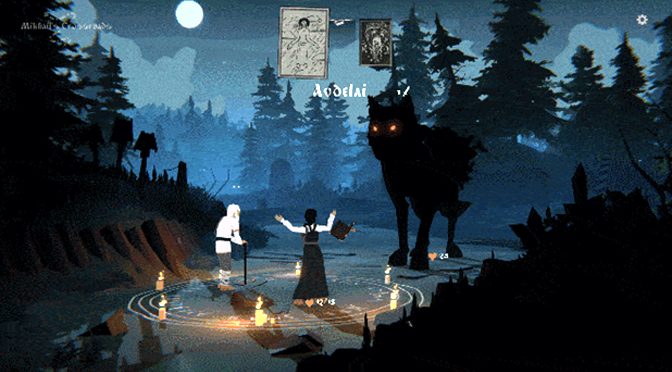 Morteshka is pleased to announce that it has achieved a major milestone in its Kickstarter campaign for Black Book reaching $100,000 in funding with 13 days left to go. This achievement was made possible with the support of more than 3,000 project backers and continues to grow.

Morteshka has also announced its latest series of stretch goals, leveraging the overwhelming community support to build Black Book into an even greater adventure.

Blending the best parts of card-based, deck-building RPGs with adventure games, Black Book takes gamers on a journey through Slavic folktales, told by a team who grew up hearing them. It’s a world where myth meets reality and otherworldly creatures live alongside humans but only a select few are gifted enough to see it. Demons, elementals, giant wolves, talking pets, and more bring this shadowy and mysterious world to life. Recruit evil forces to do your bidding, but be careful, because not every monster is what it seems.

Just as Black Book embraces the strong narrative of the adventure genre, fans of turn-based RPGs will feel right at home with its strategic turn-based combat. As you chase the seals of the Black Book, you’ll collect cards that combine to create unique and devastating spells. The cards you choose will directly impact how each battle unfolds, but it doesn’t end there. Companion characters and demon recruits add another layer of strategy to Vasilisa’s journey.

Inspired by games like The Witcher, Slay the Spire, and SteamWorld Quest, Black Book will draw you in with its beautiful, hand-drawn art style and hook you with its evocative, interactive narrative. The world of Slavic mythology is at once familiar and ominous, filled with danger and intrigue, and grounded in Vasilisa’s pursuit of powers that may better be left alone in the pursuit of lost love.