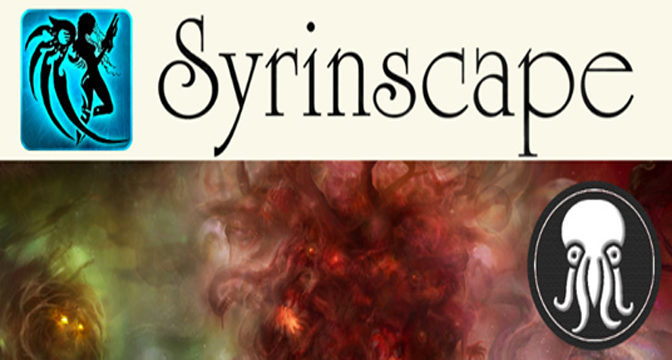 Syrinscape, creator of the award-winning apps that bring tabletop games to life with movie-like sound, announces today the line-up of Cthul-activities planned for this year’s UK Games Expo (Birmingham, June 2 – 4, 2017), including the UK Games Expo debut of the wildly popular Live RPG Plus All-Star Gaming Event.

Join Syrinscape creator and Dicestormers host Benjamin Loomes as he takes on an all-star cast adventure party and transforms the room into a fast and fun gaming experience for players and audience alike with Live RPG Plus. Along with Munchkin and Dork Tower artist John Kovalic, host of Knightmare Live Paul Flannery, Paizo editor-in-chief F. Wesley Schneider and Call of Cthulhu line editor Mike Mason and Pathfinder Society coordinator Tonya Woldridge, UK Games Expo attendees will have their first chance to play in this event that has become a fan-favorite around the world as audience members contribute to the action via shout-outs, hold-up cards and social media. Live RPG Plus will take place on Friday from 8pm – 10pm. Tickets are now available from UK Games Expo.

Attendees of UKGE will be treated to the debut of the immersive new Syrinscape Sound Cave in the Trade Hall, where a live microphone will be set up for attendees to deliver their best “maddening voice” will be combined en masse to build the insanity-inducing cacophony that is Lovecraft’s Shoggoth creature, to be released in a SoundPack later this year.

Syrinscape is also thrilled to announce the forthcoming SoundPack, Cthulhu Rises DoomPack, which will release during UK Games Expo. Cthulhu Rises contains six spine-tinglingly immersive locations and encounters inspired by the Cthulhu mythos. Along with the mighty Cthulhu, Nyarlathotep, the Mi-Go, Great Old Ones and Outer Gods alike, this six-pack of sonic doom and horror will have gamers playing on the edge of insanity.

Around the con, Syrinscape will also be bringing events for Pathfinder Society and Shadows of Esteren to life with 3D sound, and a two-year SuperSyrin subscription valued at $240 (£190) can be bid on in the UKGE Charity Auction.

The award-winning Syrinscape apps bring fantastic, realistic sound to tabletop gaming and are compatible with nearly any mobile device or computer. Syrinscape’s Fantasy Player, Sci-Fi Player and Board Game Player apps are free to download and the official sounds of Pathfinder, Mutants and Masterminds, Catan and hundreds of other sound creations for nearly any tabletop game are available for sale individually or as part of the Supersyrin Subscription for $10/month.

Syrinscape can also be completely unlocked for free for 30 days at Syrinscape.com/freetrial and includes two free SoundSets to keep after the trial.