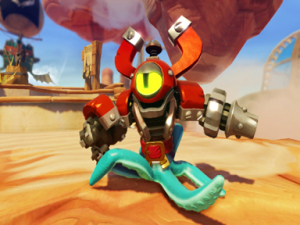 Portal Masters can show their love for trapping and playing as villains in Skylanders Trap team via the #TrapAndPlaySweeps photo and video sharing sweepstakes starting today. Activision Publishing, Inc., a wholly owned subsidiary of Activision Blizzard, Inc., recently announced that for the first time a full Skylanders game is compatible with the latest iPad, Kindle Fire and Android tablets, and now Skylanders Trap Team starter packs are available at Apple retail stores nationwide and the Apple Online Store (www.apple.com), making it easier for fans to experience the magic of Skylands on iPad.

Skylanders Trap Team on tablet delivers the same game experience with console-quality graphics(1) and comes with its own high performance controller, delivering yet another significant technological leap for the Skylanders franchise. In the game, Portal Masters seek out and defeat the most wanted villains in all of Skylands, pulling them out of the game and into living rooms by capturing them in magical Traps. Players can then send villains back into the game where they play as them to fight for good.

“The arrival of Skylanders Trap Team in Apple retail stores nationwide and the Apple Online Store marks a momentous milestone for the Skylanders franchise,” said Josh Taub, senior vice president of Product Management at Activision Publishing, Inc. “We’re thrilled that anyone who gets a new iPad this holiday season will have the ability to experience the magic of the complete Skylanders game whenever, wherever they want.”

With a 90 Metacritic review score for iPad, Skylanders Trap Team is compatible with third and fourth generation iPads — the iPad mini Retina, the iPad Air and the brand new iPad Air 2 and iPad mini 3 — all offering unmatched portability and high quality graphics that create an immersive, mobile experience like no other.