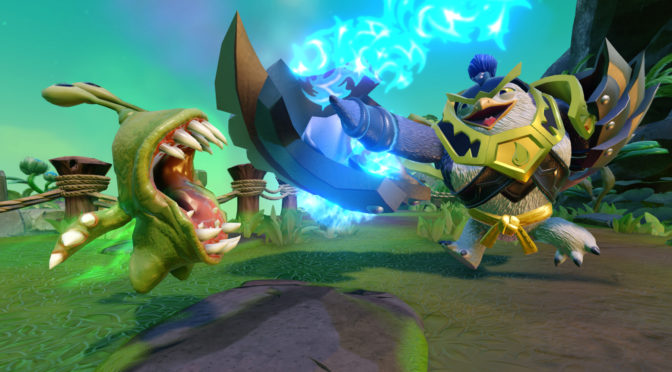 Check out our review of Skylanders Imaginators.

“From the day we created Skylanders, we have received thousands of letters from kids all over the world sharing ideas for their ideal Skylander. The creativity and imagination that this game inspires in kids is overwhelming,” said Eric Hirshberg, CEO of Activision. “And Skylanders Imaginators was designed to harness all of that creativity. It’s the game we’ve always wanted to make, and the game kids have always wanted to play.”

Developed by Toys For Bob, Skylanders Imaginators empowers players to unleash their imaginations and bring their creations to life in an all-new adventure with puzzles, battles, a compelling storyline and new lineup of heroes and villains. As part of the Creation Celebration, fans who purchase a Skylanders Imaginators Starter Pack at participating retailers nationwide will receive a fully-playable Kaos toy for free. Offer valid until October 22 or while supplies last.

“This year, we’re letting fans create the magic of Skylanders by giving them the power to express their imaginations in ways never before possible,” said Josh Taub, senior vice president, Skylanders at Activision Publishing. “Skylanders encompasses an award-winning videogame franchise, top toy property and now a new television series, Skylanders Academy from Netflix and Activision Blizzard Studios. We’re proud that we’ve created a beloved franchise that has touched fans’ lives worldwide in so many ways.”

Skylanders Imaginators is sure to be at the top of kids’ wish lists this season. Earlier this year, Skylanders Imaginators won the prestigious “Best Family Game” from the two top videogame tradeshows in the world: Electronic Entertainment Expo (E3) and Gamescom. The game also has been named to the Toys“R”Us 2016 Hot Holiday Toy List and the Toy Insider’s Hot 20 Holiday Toys List; as well as highlighted as one of Parents magazine’s “2016 Best Toys.”

“The new innovation in Skylanders Imaginators provides kids with so many opportunities to let their creativity shine,” said Richard Barry, executive vice president, global chief merchandising officer, Toys“R”Us, Inc. “This is certainly an exciting time to be a Skylanders fan, and we’re happy to be a premier retail destination for Portal Masters this holiday season.”

The new toys-to-life game offers fans more creative choices than ever before, including a variety of music tracks that players can use to customize their Imaginators. Song selection includes “A State of Trance” music from famous DJ Armin van Buuren. Imaginator music styles provide players with a fun way to express their characters’ personalities – each style morphing to match the players’ gameplay experience.

“From the moment I got my hands on Skylanders Imaginators, there was an instant connection with the game. Not only because it’s a lot of fun, but because I truly enjoyed watching my creativity come to life through my character,” said Armin van Buuren. “I’m pleased that my music can be chosen as a theme for players’ favorite Skylanders – and I can’t wait to play the game at home.”

The story of Skylanders Imaginators takes place long ago when the Ancients used a mysterious power known as “Mind Magic” to create everything in Skylands. With it, they conjured into existence anything that they could imagine! However, they soon learned that in the wrong hands, it could be very dangerous, and so they sealed it away so that it could never be misused. After discovering this ancient secret, Kaos has unleashed the power of “Mind Magic” into Skylands once again – and he is using it to create an unstoppable army of Doomlanders, the likes of which have never been seen! Now it’s up to Portal Masters to create Skylanders Imaginators from their own imagination and stop Kaos and his evil Doomlanders before it is too late. And to help train them, Eon is sending the greatest mystic warriors of all time – the Senseis!

Adding to the fun, Skylanders Academy, the new animated comedy-adventure show inspired by the award-winning Skylanders franchise, will debut on Netflix on October 28.