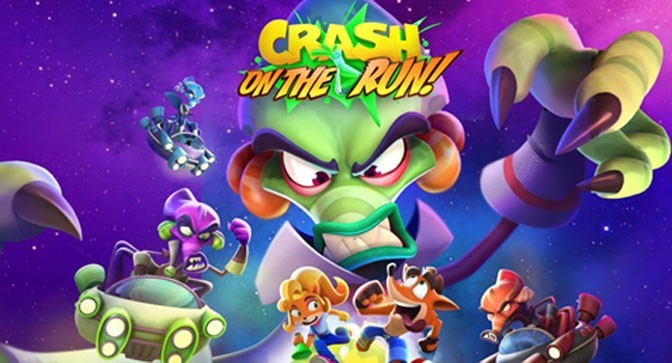 This season is not only fast, but fur-ious! King, a leading interactive entertainment company for the mobile world, today announced that Season 4: Survival of the Fastest for Crash Bandicoot: On the Run! will be launching on July 15 at 4am PDT. In the fourth season Nitros Oxide is back, and this time he’s bringing all the Nitros Oxides from throughout the multiverse to challenge Crash and Coco. Crash Bandicoot: On the Run! puts the pedal to the metal with a bunch of new content in its latest season that features updated lands to explore, new minions to defeat, exclusive rewards and themed Sports Day skins to earn, and new bosses to vanquish.

Nitros Oxide, who has been a fan favorite character in the Crash Bandicoot franchise since his first appearance in Crash Team Racing (1999), has taken over three worlds and turned them into his home planet – Gasmoxia. Players will have to leave it all on the track in order to defeat the various multiverse Nitros Oxides and their gangs of henchmen in Season 4: Survival of the Fastest. Players can also complete new weekly missions to earn trophies, compete on the new seasonal leaderboard and complete the Bandicoot Pass to earn exclusive skins and rewards.

In Crash Bandicoot: On the Run! players run, spin, swipe and smash their way through mysterious lands, defeating the henchmen of Dr. Neo Cortex who has dispatched iconic villains across the multiverse. With the help of his sister Coco, Crash must bash Cortex’s minions back to their own dimensions! The game offers an un-fur-gettable gameplay experience, with a variety of running challenges and exciting features that add depth and progression to the game including time trials, collection runs, base building and crafting. The game will also be updated regularly with new cosmetic items, classic and creative new skins, and much more during regular seasonal updates.

The Wumpa Archipelago is vast and fans of the Crash Bandicoot franchise will immediately recognize memorable regions from previous Crash Bandicoot games, such as Temple Ruins, Turtle Woods, The Lost City, The Lab and more. Classic enemies and bosses, including Scorporilla, Nitrus Brio and Fake Crash will try to thwart Crash’s progress in a brand-new adventure that gamers can play on the go.

Crash Bandicoot: On the Run! is now available to download and play for free on iOS and Android. For more information visit www.CrashOnTheRun.com