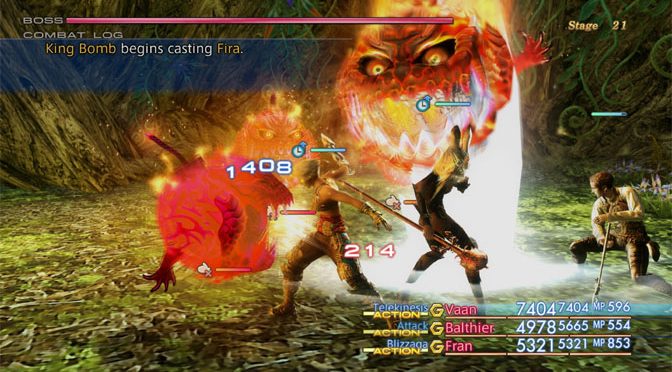 Role Playing Games have been constantly evolving every gaming generation. These evolutions range from combat systems to larger stories. While many of these changes are well received, there is one that I am not a huge fan of. The change I hate the most is the AI combat system that essentially makes it so the player does not need to be there. Final Fantasy XII is going to be my whipping boy for this column as it has the heaviest involvement of this combat.

Final Fantasy has been trying to merge real time and turn based combat for many years now. This has morphed from the gambit system in Final Fantasy XII to whatever Frankenstein’s monster that is Final Fantasy VII Remake. Generally they have not been well received as many traditional players, like myself, prefer the old turn based style of combat. These newer combat systems either rely on AI controlling non-active party members or having the player switch rapidly between different characters during a large fight to micromanage.

I recently bought Final Fantasy XII: The Zodiac Age because I hadn’t played it for very long and wanted to give it another whack. While I’m not as repulsed as I was when I was younger, the gambit system still had me going “Why am I even here?”. For those that don’t know, the gambit system is a set of what-if commands to set because your characters autobattle. These commands are stacked in order of importance and read like “If ally’s health drops below 50% – Use hi-potion.”

This article is not saying this is a bad combat system. The chief editor and I mused over some real time strategy games that could use a system like this. But for an RPG that is supposed to involve the player in combat and story, this seems like it is pushing the player away. Subsequent Final Fantasy games have decided to pull the players back a little more like in Final Fantasy XIII’s Paradigm system. But this got me wondering if some games are losing the focus of player involvement. I have nothing to support that thought, but it is just something I think about from time to time.

Personally, I would prefer to go back to turn based as it seemed to make things simpler. Final Fantasy X had the most seamless turn based system. Other games like Legend of Dragoon and Lost Odyssey found ways to make the system more involved without automating. Of all the recent Final Fantasy games I’ve played, the only combat system I like was Final fantasy XIII’s Paradigm system. I got used to Final Fantasy VII Remake’s, but never fell in love with it.

Overall, I find myself looking back at older RPG’s and wish we could go back to that time. Even the long stretch of mediocre Xbox 360 RPG’s (Enchanted Arms, Eternal Sonata, Infinite Undiscovery, ETC.). While some games have meshed the real time and turn based semi well (Valkyria Chronicles), I feel that most games should pick one or the other.

What about all of you? Do you play RPGs, and what is your opinion of the combat systems you deal with there? Let me know in the comments section, and perhaps we can dive into this topic a bit more in the future.