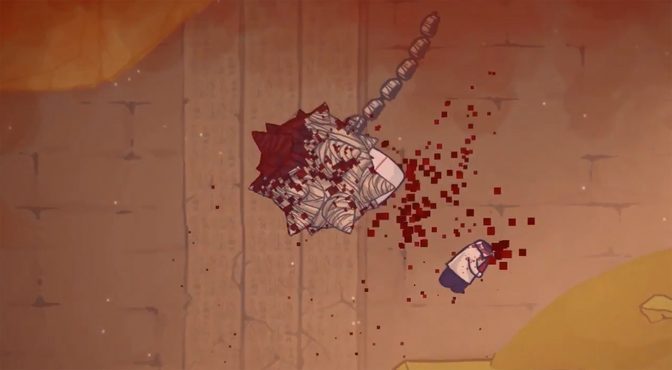 Publisher Toge Productions and developer Rolling Glory Jam today announced their story-driven comic platformer Rage in Peace will be released on Steam for PC and the Nintendo eShop for Nintendo Switch on November 8th. Armed only with memorization skills and quick wits, players embody the protagonist Timmy to battle death and fate so that he can die in peace.

“Rage in Peace ponders a serious existential subject like death and presents it in an amusing, light-hearted way,” said Toge Productions Founder and CEO Kris Antoni. “Its introspective humor will appeal to a wide range of players, and the fast-paced gameplay will keep them on their toes!”

Rage in Peace follows the exploits of Timmy Malinu, an emotionally numb 27 year old actuary whose greatest desire is to die in the most peaceful way possible: asleep in his pajamas, in the comfort of his own home, with no drama. When the Grim Reaper shows up to inform Timmy that he will die that night of decapitation, our hero’s only concern is that he goes out without even a whimper. Unfortunately, the universe isn’t so kind to Timmy and insists on spoiling his perfect death with all manner of ignoble hazards. Help Timmy get home safely, so he can finally live the death of his dreams!

Loosely inspired by Paulo Coelho de Souza stories, Rage in Peace wants to give meaning to death in a “rage game” where players meet their maker every few seconds. Despite its preoccupation with shedding one’s mortal coil, Rage in Peace is an upbeat, comical game with warm humor and bright colors brought to life by more than 10 independent Indonesian bands, as both Toge and Rolling Glory Jam showcase the best of Indonesian entertainment culture.