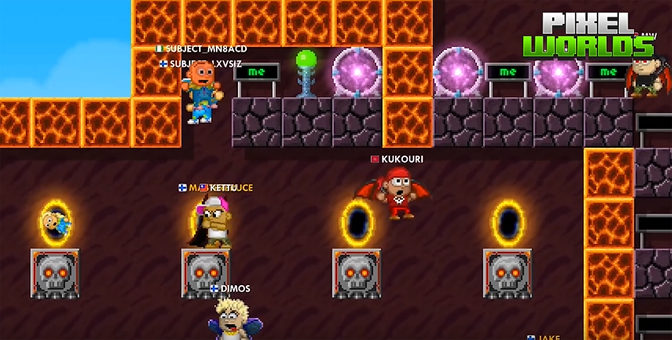 Finnish developer Kukouri, the creative force behind the Tiny Trooper franchise, today announced that Pixel Worlds, the highly social sandbox online multiplayer game with charming 2D pixel art graphics, will launch on Steam for PC and Mac on June 9th. With over one million players on mobile, Pixel Worlds introduces cross-platform play, allowing players to enjoy farming, building and trading items as well as making friends within the loyal game community no matter whether their platform of choice is a phone or a laptop.

“Cross-platform support across mobile and PC was the top requested feature by the Pixel Worlds community, and we are beyond excited to finally bring this idea to fruition!”, said Kim Soares, CEO of Kukouri. “We see Pixel Worlds as more than just a game. The social aspect and active community is an integral part of the whole experience and we continuously use both in-game and social media channels to engage players.”

In Pixel Worlds players join the ever expanding pixel universe by creating their own worlds using hundreds of different building blocks and materials. In total there are already close to a 1000 items ranging from furniture to clothing items, with more added in updates every few weeks.

The game economy is run by the players themselves, meaning there are no fixed prices nor limits and trading is done while bartering through the in-game chat system in player-designed marketplaces. Players are free to explore other worlds, create platformer levels for others to play and participate in Live Events in order to win some in-game goodies.

Going all out with social media integration into the game experience, Kukouri fosters Pixel Worlds’ community by not only playing the game daily themselves and interacting with players, but also by arranging weekly streams on Youtube, Twitch and Mobcrush, as well as promoting user and influencer videos in-game as a part of their Influencer Program.