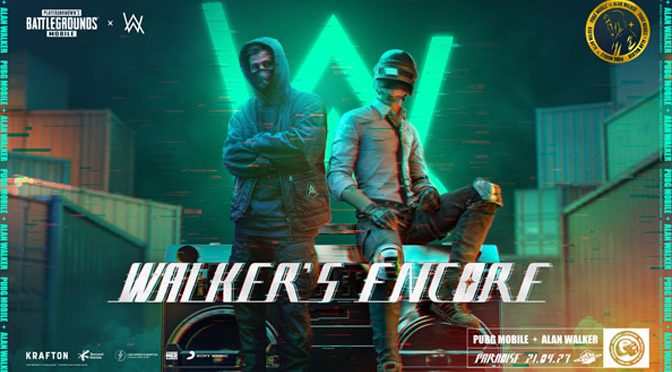 PUBG MOBILE is happy to announce that Alan Walker, the Norwegian platinum-selling music producer and DJ, will release his new song ‘Paradise’ exclusively on PUBG MOBILE on September 23rd, with the song releasing on streaming services on the same day. ‘Paradise’, penned and produced by Alan Walker, K-391 and Boy in Space will be heard in the current lobby and vehicle background music beginning on September 23rd until October 21st for fans to enjoy, with the song also unlockable in players’ Personal Space Playlist.

The collaboration will feature a new wardrobe of outfits and exclusive items for players including the Exclusive Title “Walker”, Walker 2021 Set, Walker 2021 Buggy, Walker 2021 Graffiti, Walker 2021 Space Gift, Alan Walker Space Playlist and the return of the exclusive outfits released during the previous Alan Walker collaboration. Players can access an early teaser via the in-game event page, and get ready for the upcoming community challenge event with exclusive rewards. More details will be revealed in PUBG MOBILE’s social channels.

A number of themed in-game events will also be added as part of this collaboration. Beginning September 23rd until October 21st, players will be able to earn the various Alan Walker items by completing themed in-game tasks, including the permanent Walker Hoodie. These items can also be earned through sharing the teaser and event pages on social media.

Famed for his number one single “Faded”, the song catapulted Alan Walker to stardom in 2015, which he followed with a number of hits such as “Darkside,’ ‘All Falls Down’ and ‘Alone.’ A long-term partner of PUBG MOBILE – the musician previously teamed up with the game in 2019 to release the anthems “Live Fast” and “On My Way”, performing them live in Berlin at the PUBG MOBILE Club Open 2019.

“I can’t wait to continue this journey with PUBG MOBILE.” said Alan Walker, “this time, my new song “Paradise” will be available in the game and we are introducing a special new outfit. I hope you are all ready to experience the World of Walker through PUBG MOBILE!”

“We’re very excited to welcome Alan Walker back to PUBG MOBILE with his new song ‘Paradise’.” said Vincent Wang, Head of PUBG Mobile Publishing, Tencent Games. “Our players loved the previous collaboration we had with him in 2019, which is why we’re so happy that he’s returned to our universe. Best of all, PUBG MOBILE fans will be able to enjoy this new song in the game, with its exclusive worldwide release in streaming services on the same day.”

The collaboration between PUBG MOBILE and Alan Walker is part of the new Version 1.6 update, which launched earlier this month, bringing new content, game modes and a number of exciting collaborations to the game.