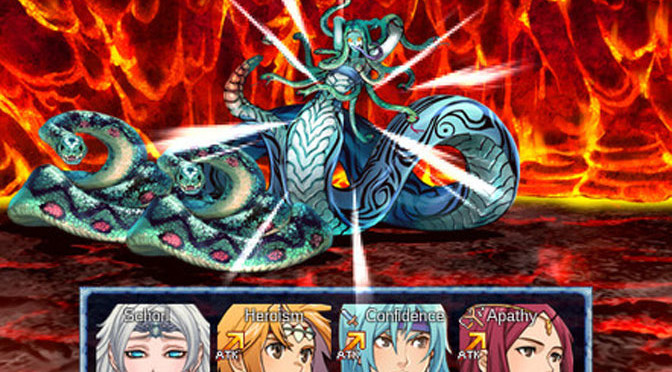 DegiGames in association with Wyrmling Productions is proud to announce Pale Echoes, coming to Steam on Dec 10, 2015 for Windows OS. Pale Echoes takes standard JRPG combat and turns it sideways, creating a non-random puzzle based combat system and setting it in a completely dead world. The challenges the two sole survivors face consist of the possible restoration of life and learning the truth of the terrible tragedy that brought them there. Find out more at http://store.steampowered.com/app/377190.

The world has died. Into this dead world enters a magical being named Spinel and a human named Schorl, the last two survivors in the lifeless wasteland. They begin a lifelong journey to understand what happened and whether the damage can be reversed.

In Pale Echoes, the world is split into two parts: the current, dead, world, and a recreation of the past just before the cataclysm. Travel back and forth between these two worlds, encounter memories of the people who once lived there, and begin to restore life to the land. While most of the echoes of the past that you meet are harmless to the living, the stronger ones pose a real danger. Combat in Echoes is done by collecting powerful personalities and using them to fight in your place. Each memory has its own strengths and situations in which they are best employed, creating a turn based puzzle combat system where victory relies on using their various skills at the right moments.

Can you return a dead world to life? The search for meaning beyond death itself awaits in Pale Echoes. Discover more on the Steam Store page at: http://store.steampowered.com/app/377190.

One thought on “Pale Echoes JRPG Puzzler Coming To Steam”