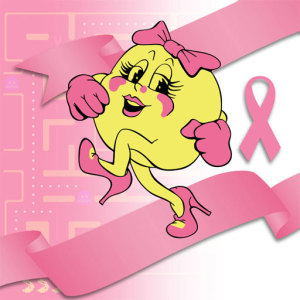 BANDAI NAMCO Games America Inc. has joined forces with the National Breast Cancer Foundation (NBCF) in the fight against the second leading cause of cancer deaths among U.S. women with the launch today of its Ms. PAC-MAN Pink Ribbon Campaign. Headlined by BANDAI NAMCO’s iconic Ms. PAC-MAN mascot and anchored with new gameplay incentives across the video game publisher’s range of mobile titles, this new effort will raise funds for NBCF to help women now and inspire hope to those affected by breast cancer through early detection, education and support services.

“Awareness and early diagnosis are critical in the fight against breast cancer,” said James Kucera, head of Mobile at BANDAI NAMCO Games America Inc. “We are proud to lend our voice to the fight with Ms. PAC-MAN and BANDAI NAMCO’s Pink Ribbon Campaign.”

“While video games often bring amusement and joy to our lives, this is a chance to bring hope as well.” Senior Producer Ben Acevedo said. “Breast cancer has directly affected my immediate family and it’s a fantastic opportunity for gamers and the industry to get involved. While the mazes we are offering in October are fun, the real challenge is to raise awareness and get players, producers, artists, programmers across the mobile industry to join us and Join the Pac.”

“We are very excited about our new partnership with Bandai Namco and the Ms. PAC-MAN Pink Ribbon Campaign,” says NBCF Founder & CEO, Janelle Hail. “By encouraging their gamers to Join the Pac, we can reach more women than ever with our message of hope. The funds they raise will allow us to provide early detection services for women in need in all 50 states.”

The heart of the Ms. PAC-MAN Pink Ribbon Campaign is an exclusive new maze for sale across a multitude of Ms. PAC-MAN and PAC-MAN iOS and Android titles for $0.99 through October. All proceeds from purchases of this new level will go directly to support the National Breast Cancer Foundation. The in-game user interface and artwork for these products will change to a new pink ribbon theme for October alongside this new content. In addition, players can share their scores via Facebook and Twitter, inviting friends to meet the challenge with a donation and high score of their own.

Ms. PAC-MAN and PAC-MAN are two of gaming’s most historic characters, the stars of a long series of high score-fueled retro arcade experiences. Players navigate either character through labyrinths of tight corridors, dodging dangerous ghosts while gobbling up points, fruits, power-ups and extra lives.

The Ms. PAC-MAN Pink Ribbon Campaign will run from now until October 31.