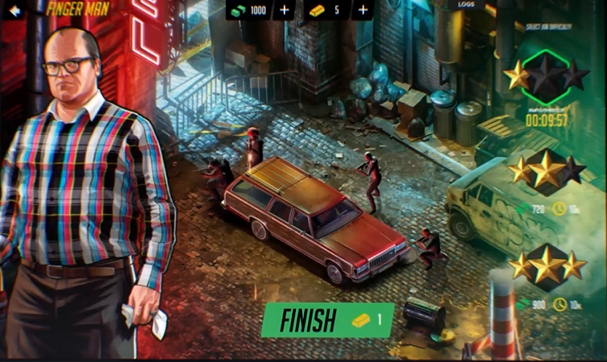 Mad Dogs, a turn-based tactical RPG about warring factions in the New York City underworld, has been released for iOS, Android and Facebook. The game is distributed as free-to-play with in-game purchases.

In Mad Dogs, guys let their imagination run free. The 18+ rating provides an excellent opportunity to recreate the criminal world and all of its main distinctive traits. Weapons, drugs, cool cars, fallen women, ruthless criminals, bloody firefights are abundantly present in Mad Dogs. Writers, the story turned out to be good and compelling, lavishly spiced with strong language and great sense of humor.

The player will have to take charge of the criminal organization, put together the gang of one’s own and try to fight the way to power over the enormous city. The game is set in 70s of the previous century. The plot is based on confrontation with the Infernal Six, the bosses of the largest underworld gangs of Russian and Italian mafia, Mexican cartels and Japanese Yakuza, who control the city. Story will unravel over 10 chapters of 6-10 missions each, and the game will feature more than 200 weapons with customization options, as well as 55 characters with unique skills and 75 cars.

The story and setting of Mad Dogs were inspired by such well-known projects as Grand Theft Auto and Mafia, but in terms of gameplay it’s somewhat reminiscent of the original Fallout and Xcom. The game features the distinct visual style, detailed animations, and is tightly packed with references to other known phenomena of mass culture.