Hugo Games is pleased to announce that it has launched the highly anticipated game, “Kings of Soccer”, on the Apple App Store and Google Play.

The game is an action-packed mobile game where players leads some of Europe’s top clubs to fame and victory using superstar footballers including Neymar, Cristiano Ronaldo and Lionel Messi. Kings of Soccer has been in soft-launch for several months and even though the game has only been available for a small percentage of gamers, the game already has more than 500,000 downloads and a four-star rating on Google Play. 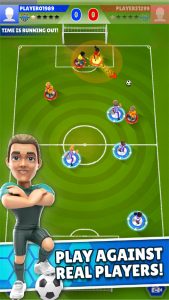 “We are extremely excited to launch Kings of Soccer and can’t wait for gamers around the world to lead their favorite club to victory,” says Henrik Nielsen, CEO of Hugo Games. “During the soft-launch, we received valuable feedback from gamers and are confident that players will have an amazing and fun gameplay experience. The game is now available to the millions of soccer fans who love the clubs and are geared up for this summer’s World Cup.”

Kings of Soccer features nine of the world’s most legendary soccer clubs and more are expected to join. The clubs are FC Barcelona, Real Madrid, Juventus, Porto, AS Monaco, Paris Saint-Germain, Dortmund, Arsenal and Liverpool. The clubs will use their social media to promote the game and several of them have tens of millions of social media followers.