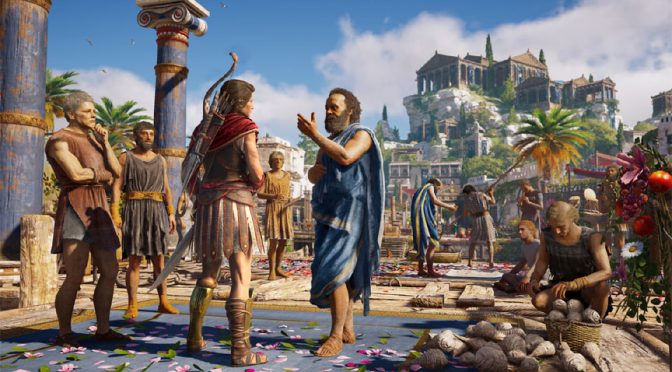 French video game developer Ubisoft’s most recent entry in its Assassin’s Creed franchise, suggestively named Odyssey, is the company’s attempt to penetrate yet another ancient culture and offer its take on it. And quite surprisingly, when everyone thought it would be a massive failure (credits to AC Unity), Odyssey turned out to be quite something.

Lots of massive entertainment studios have, are, and probably will be trying to introduce ancient worlds’ settings and context within their games and deliver a historical gaming experience to their clients. But not many companies have been successful in depicting those worlds accurately.

According to Edward Said and his theory of Orientalism, some cultures that deem themselves progressive (Western in this sense) have the tendency of deeming others less developed, falling behind, and full of mysticism. And in games, that can mean only one thing: creating an ancient world that is based on wrong assumptions on mythology, culture, and contemporary context of the said period.

But every once in a while, we get to see products that manage to stay away from that Orientalist outlook and look at the ancient culture, or at least try to, through the lens of the regular people. Just take a look at what some of the slot game developers are doing in Canada.

There are casino gaming developers, including PlayAmo, that have taken an interest in the ancient world, yet haven’t gone too far in bringing extensive mysticism within the gameplay. A regular experience within a slot game the casino online Canada offers to the players is saturated with skins and symbols from ancient Greece, Egypt, or Persia, and features a moderate amount of gods, titans, and other mysterious beings from those places and times, but more importantly, they just convey the feeling one would get when actually traveling there, thus, an experience from the viewpoint of a regular person.

With the same amazement can we talk about the Assassin’s Creed: Odyssey and how Ubisoft managed to nail Ancient Greece in this game. And according to the gamers on Uplay and Steam, who gave the game very positive ratings overall, AC: Odyssey may actually be one of the rare games that don’t delve too deep into the mythological world.

Now, this is not to say that there’s no mythology or legend in the game. It would’ve been a total fabrication of facts because as you progress through the story, you’ll have to face some of the most terrible enemies coming from… Well, not this world. Not only that, but even from the beginning, your character, whether you choose Alexios (a male) or Kassandra (a female), receives a spear from their mother that originally belonged to the legendary Spartan king Leonidas, and it holds some otherworldly powers.

You read that right: AC: Odyssey also features King Leonidas whose brave army of 300 Spartan soldiers faced an insurmountable Persian kingdom and fell on the battlefield. In fact, the very opening scene starts with the battle in Thermopylae. And while the battle itself is legendary and even mystical at some point, it still features very humane elements like Leonidas talking to his soldier about his unfulfilled wish to go fishing with his son.

Within the context of the Peloponnesian War

But that’s just a tiny fraction of the whole game that is set in the 5th century B.C. Greek world where, at the moment, the Athenian and Spartan polises are entrenched in the Peloponnesian War. Within this context of belligerent Greek city-states, you get to travel through all of them, completing main and side quests, and trying to collect missing pieces of your past.

What’s really interesting and commendable to see is that while there are some mysterious organizations and beings that you have to face, when you actually meet them, you can feel that they too have emotions and have their own backstory. But besides that, the main story revolves around your family as an “ex-Spartan” mercenary who was once banished from their motherland and now is on a very emotional and compelling journey.

Additionally, Ubisoft wanted to make the Greek experience as real and compelling as possible, for which they decided to stay away from Hollywood actors and their fake Greek accent/slangs and instead, they hired real Greek actors, Melissanthi Mahut (for Kassandra) and Mihalis Antonakos (for Alexios), who already had that accent and made dialogues much more authentic and believable.

To sum it up, Assassin’s Creed: Odyssey is one of the more popular and visually-stunning games that also manages to keep the cultural context as authentic as possible. While it certainly has its fair share of mythological and mysterious elements featuring in the plot, the game is surprisingly realistic as it portrays the ravages of the Peloponnesian War, as well as the lives of the regular Greeks in the 5th-century-B.C. beacon of civilization.