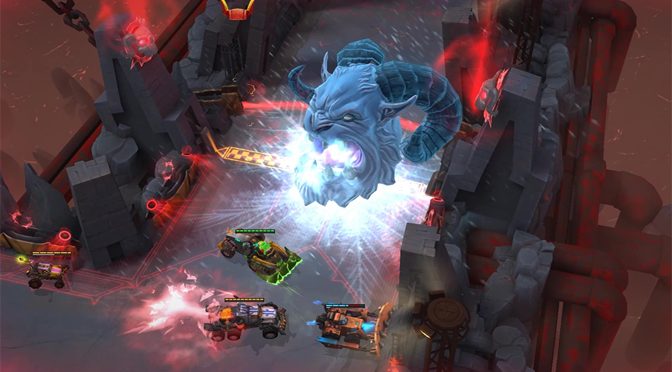 After a fresh blast of nitro with the recent launch of Heavy Metal Machines for PlayStation 4 and Xbox One the engines of Hoplon Infotainment are running full throttle. Now, this successful Free-to-Play Multiplayer Online Vehicular Combat game is adding a new arena, Sacrifice Sanctuary. A hellish setting filled with new obstacles, shortcuts and environmental hazards.

Rumor has it that the Metal Gods were able to imprison monsters into the depths of what was once known as Earth. To keep them hibernating, the Sect of Metal claims that sacrifices are needed, but nobody knows for sure. After the ruin of the old Temple, the Sect came up with the new Sacrifice Sanctuary. This arena is filled with hazards, shortcuts, and new mechanics making it a perfect environment for skilled racers to do their worst.